Is the progress with the government formation real and realistic? Everything that is happening so far falls within the framework of the declaration of intentions, and because all political parties want to appear facilitators, the statements issued by them are dominated by positivity. However, there are indications that the situation will change when the research moves into further details. The President of the Republic frankly announces in his private assemblies that he will not give Najib Mikati what he didn’t give to Saad Hariri. On the other hand, Mikati seems to be condemned to two things: The high practical ceiling that Saad Hariri set when trying to form a government and the theoretical framework that was determined in the last statement of former prime ministers, so the required breach is a difficult matter, if not mission impossible, along with hard economic and financial situation. The second is what is reported that Hezbollah has become embarrassed within its environment and that it wants a settlement after the economic crisis reached its peak. Will Hezbollah interfere with its ally Aoun to give Mikati what he did not give to Hariri? Or will it remain neutral, as if the matter isn’t concerning it?

And in case of Hezbollah’s intervention, will the President of the Republic respond to his wishes, or will Aoun continue his refusal, unless the electoral and political interests of his son-in-law, Gebran Bassil, are secured? Here lies the knot. So, will Mikati apologize quickly, or will the matter be resolved and a government of 24 ministers will be formed?

The coming days are critical and the wait will not be long because Mikati is rushing, and he doesn’t want the time game to exhaust him up it did to Saad Hariri. Let us wait in a country of deadly waiting. 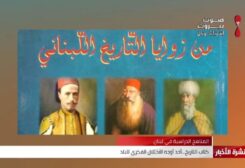 The history book in Lebanon is a big lie, this is what you Lebanese are forbidden to know