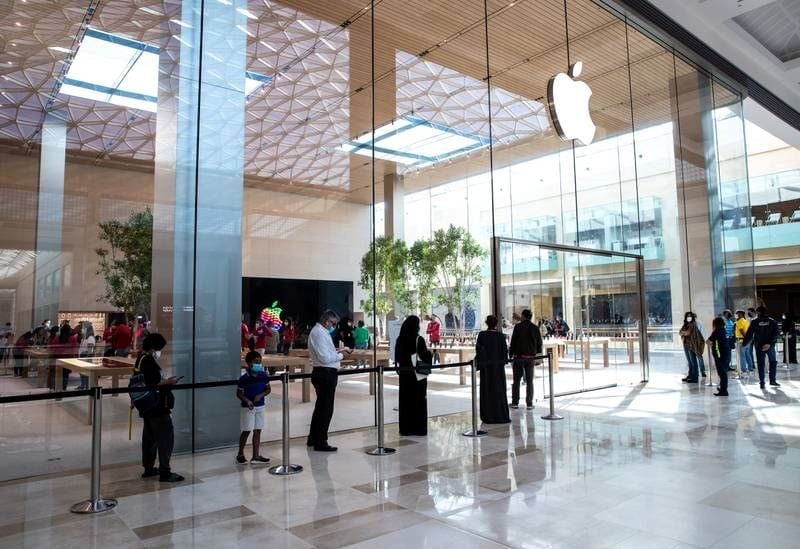 Apple unveiled a renovated shop in Abu Dhabi’s Yas Mall on Thursday, with the branch now in a good position and double the size it used to be.

The wood-and-glass-themed store sells the whole Apple product line accessible in the UAE, as well as the technology company’s trade-in program and technical assistance.

It is staffed by 100 people who speak 33 languages and come from 32 different countries.

The store now has trees and two skylights, similar to its locations in Dubai’s Mall of the Emirates and The Grove in Los Angeles.

“We look forward to bringing the best of Apple to the UAE and expanding on our heritage in the area,” said Apple’s senior vice president of retail and people, Deirdre O’Brien.

According to the company’s website, Apple now has a network of 516 stores in 25 countries, up from its initial locations in the US states of Virginia and California in 2001.

Apple’s retail locations have become an indelible part of the company’s brand and culture. From being merely retail stores, Apple has broadened their role – most notably as venues for its free ‘Today at Apple’ instructional programs and gathering places for the community – and blended the outlets with the culture and environment of its sites.

For example, the Dubai Mall location includes a motorized Solar Wings balcony with a view of the Dubai Fountain, whilst the Marina Bay Sands location in Singapore was constructed as a “floating sphere,” making it the first Apple Store to sit directly on water.

Apple’s new Yas Mall shop, the size of which was not disclosed, drew a sizable audience.

Mr Jawad, a self-described “huge” Apple fan for over 25 years, has been to every new Apple Store in the UAE and was the first client at the new Yas Mall location.

Apple, which has been present in the Middle East for over a decade, now has three outlets in the UAE.

The original Yas Mall shop debuted in 2015 with Dubai’s Mall of the Emirates branch, making them the first Apple stores in the Middle East, and The Dubai Mall store followed in 2017. To far, these locations have attracted about 30 million visitors.

Cupertino-based Apple is the most valuable business in the world, with a market capitalization of over $2.87 trillion as of the conclusion of trade on Wednesday.

Along with Microsoft and Saudi Aramco, the corporation is one of just three to have exceeded the $2 trillion barrier. On January 3, Apple momentarily surpassed the $3 trillion value, becoming the first firm to do so.

Apple reported record financial results in its fiscal first quarter of 2022 last week, with net profit soaring more than 20% to over $35 billion and revenue increasing 11.2 percent year on year.

It said earlier this month that developers on its App Store had generated more than $260 billion from the sale of digital products and services on the platform since its inception in 2008.

Apple also began testing a feature in the first iOS 15.4 developer beta release last week that will allow its Face ID facial recognition technology to function with masks and without an Apple Watch.