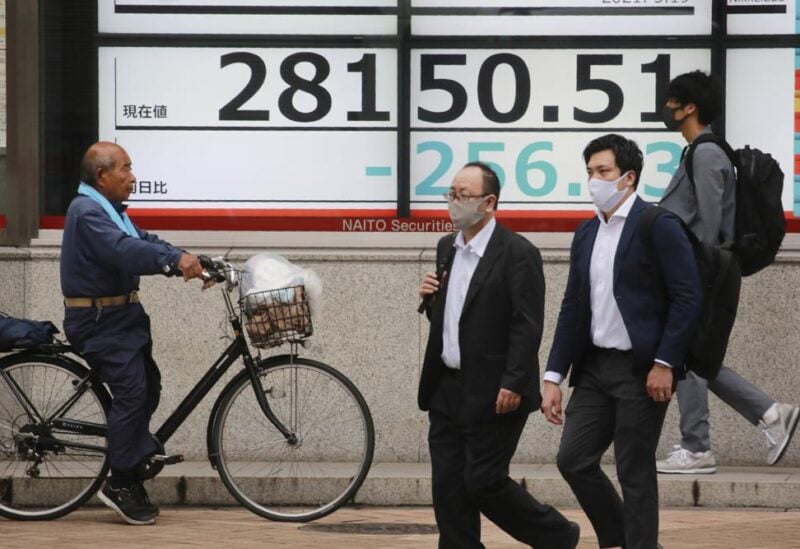 TOKYO: Asian shares fell Wednesday, tracking a decline on Wall Street that was led by big technology stocks. Investors are awaiting the release of minutes from the latest Federal Reserve policy setting meeting.

“Major U.S. markets ended the day lower, as investors took some risk off the markets ahead of the Fed minutes release later today,” said Yeap Jun Rong, market strategist at IG in Singapore. “Asia markets are set to track the U.S. indexes lower.”

A day after Japan reported its economy contracted at a 5.1% annual rate in the first quarter of this year, Fitch Solutions forecast the economy will grow 2.5% this year, highlighting the challenge as the country battles surging coronavirus infections.

“The slow vaccination roll-out in the country means that the country continues to face risks from sporadic movement restrictions and other tightening measures that will disrupt a healthy recovery in activity,” the report said.

The Tokyo Olympics, due to start in late July, will be held in such a reduced capacity, “the positive economic gains from the event will likely be negligible,” it said.

Stocks closed lower on Wall Street as a late-afternoon sell-off in technology companies helped nudge stock indexes into the red for a second straight day.

The S&P 500 lost 0.9% to 4,127.83, with most of the pullback coming in the last hour of trading. Apple, Facebook and Google’s parent company all lost 1% or more as technology stocks fell broadly. While they powered the market rebound last year, tech stocks are up only 2.6% this year, the lowest gain among the S&P 500′s 11 sectors.

“We view this pullback that we’re experiencing over the last week or so as within the normal ebb and flow of a broad market that still has legs to trend higher.”

The broader market made solid gains early in the year as investors bet on an economic recovery fueled by widespread vaccinations. Expectations were high for corporate earnings and the latest round of results has been surprisingly good. Wall Street is now digesting that growth and shifting to a more cautious view.

A big question is whether rising inflation will be temporary or whether it will endure. Prices are rising for everything from gasoline to food as the economy recovers from its more than year-long malaise.

The fear is that the Federal Reserve will have to dial back its extensive support if inflation persists. That includes record-low interest rates and the monthly purchase of $120 billion in bonds meant to goose the job market and economy. For all the worries about inflation, however, many professional investors are echoing the Federal Reserve in saying that they expect rising prices to be “transitory.”

Higher interest rates drag on most of the stock market, but they are particularly painful for stocks, especially technology shares, considered the most expensive and those bid up for profits expected far into the future.

Retailers are among the last companies due to report first-quarter results, with several of them set to do so this week, including Target and Lowe’s.

On Tuesday, Walmart rose 2.2% after the giant retailer’s results beat estimates as online shopping surged from a year earlier.

AT&T fell 5.8% for the biggest decline in the S&P 500 and continued a two-day slide after the company announced it would spin off its Warner media assets into a new company with Discovery Communications.

In energy trading, U.S. benchmark crude fell 79 cents to $64.70 a barrel in electronic trading on the New York Mercantile Exchange. It lost 78 cents to $65.49 on Tuesday. Brent crude, the international standard, lost 67 cents to $68.04 a barrel.