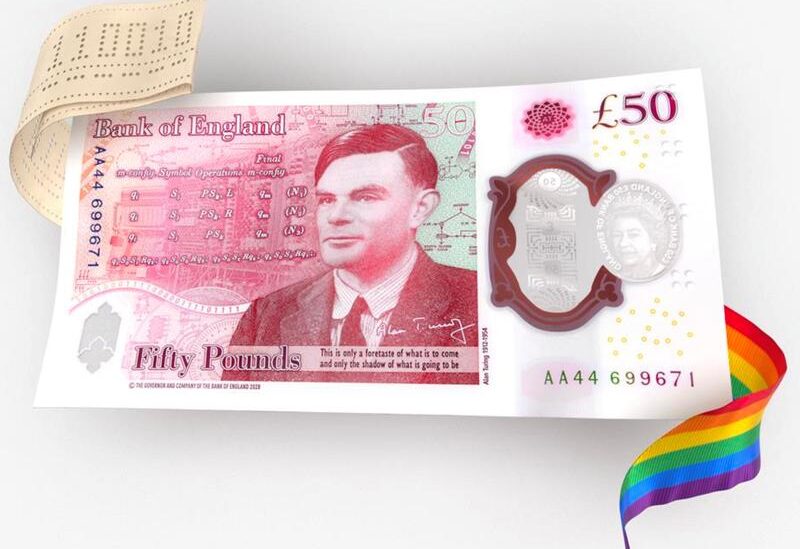 The Bank of England unveiled the design of a new banknote celebrating mathematician Alan Turing, who helped Britain win World War Two with his code-breaking skills but is said to have killed himself after being convicted for having sex with a male partner.

The new 50-pound ($69) polymer note features a picture of Turing, mathematical formulae from a 1936 paper he wrote that laid the groundwork for modern computer science, and technical drawings for the machines used to decipher the enigma code.

The note also carries a quote by the mathematician about the rise of machine intelligence: “This is only a foretaste of what is to come, and only the shadow of what is going to be.”

Turing built on work by Polish mathematicians who had discovered how to read Germany’s Enigma code, finding a way to crack the Nazis’ increased security of the code.

That story was recounted in The Imitation Game , a 2014 film in which Turing was played by actor Benedict Cumberbatch.

Turing’s work led to the decryption of German naval communications that helped allied convoys stay away from U-boats and was pivotal in the Battle of the Atlantic.

He also developed a technique that led to the breaking of Germany’s more sophisticated Lorenz cypher.

In 1952, Turing was convicted of gross indecency for having sex with a man and underwent chemical castration with injections of female hormones to avoid being incarcerated. He lost his security clearance to work with Britain’s GCHQ spy agency.

Homosexual sex was illegal in Britain until 1967.

According to an inquest at the time, Turing used cyanide to commit suicide in 1954, aged 41. He was granted a royal pardon by Queen Elizabeth in 2013 for the criminal conviction that preceded his death.

“There’s something of the character of a nation in its money,” BoE Governor Andrew Bailey said in a statement on Thursday, which highlighted the breadth of Turing’s accomplishments.

“He was also gay, and was treated appallingly as a result,” Bailey said. “By placing him on our new polymer 50-pound banknote, we are celebrating his achievements, and the values he symbolizes.”

Turing’s image on the note was a landmark moment, the head of GCHQ, Jeremy Fleming, said.

“Turing was embraced for his brilliance and persecuted for being gay. His legacy is a reminder of the value of embracing all aspects of diversity, but also the work we still need to do to become truly inclusive,” Fleming added.

The BoE said it would fly the rainbow flag from its main building in London’s Threadneedle Street on Thursday.

The 50-pound note is the BoE’s highest-value banknote. It will enter circulation on June 23 which marks Turing’s birthday.