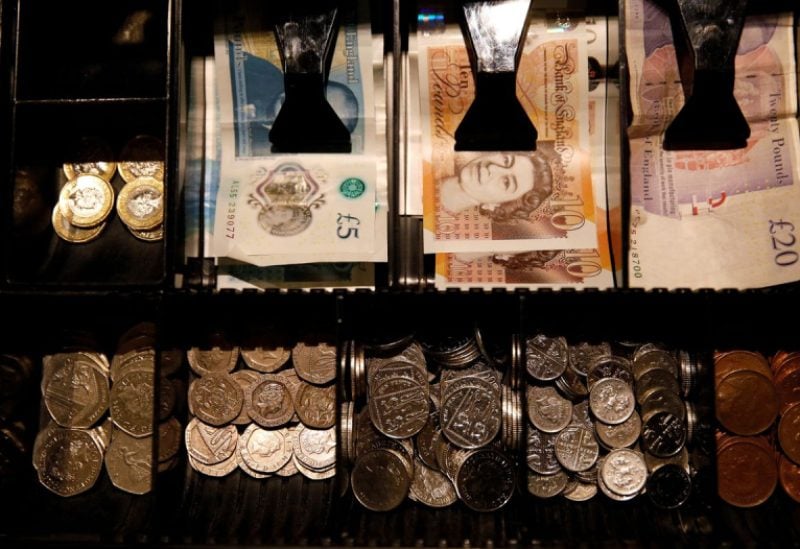 Pound Sterling notes and change are seen inside a cash resgister in a coffee shop in Manchester, Britain, Septem,ber 21, 2018. REUTERS/Phil Noble

After preliminary British economic activity data beat expectations, Sterling ticked up on Wednesday, rising for a second day against a faltering US dollar, though it still showed contraction was underway.
Flash purchasing manager index (PMI) data on Wednesday showed British economic activity sticking near 21-month lows, adding to signs of recession as orders sank and employment growth slowed.
For the latest headlines, follow our Google News channel online or via the app.
Despite the latest PMI readings remaining below 50 – the threshold for contraction – the data was slightly better than economists polled by Reuters had expected, leading to a slightly firmer pound.
At 1015 GMT, the pound was up 0.2 percent against the dollar at $1.1909, and up 0.17 percent versus the euro at 86.49 pence.
“It’s probably slightly improving the economic backdrop narrative for the pound, but I doubt that it’s PMIs that are actually going to tell us a lot about the economy at the moment in the UK or the euro zone:” said Francesco Pesole, FX strategist
at ING. He pointed out that a rough winter lies ahead, given the onset of recession and soaring energy costs.
The Organization for Economic Cooperation and Development said on Tuesday that Britain’s economy was set to lag major peers in 2023.
Data on Tuesday showed UK government borrowing was less than expected in October although the budget deficit is likely to balloon in the months ahead thanks to energy bill support measures and a slowing economy.
“The UK still has a large structural budget deficit and large current account deficit, and is reliant on foreign capital to balance payments,” said Adam Cole, head of FX strategy at RBC Capital Markets.
“For that reason, we are negative on sterling in the medium-term.”
The pound has rallied 15 percent from a record low of $1.0327 in September, but it remains 12 percent down from the start of 2022.
Bank of England (BoE) chief economist Huw Pill is due to speak later on Wednesday, with the market looking for hints over what the central bank might do next with interest rates.
“We’re likely to hear more of the same general message that the bank has done quite a lot already and that it still has a lot to do,” said Cole.
After raising the base rate by 75 basis points earlier this month, the Monetary Policy Committee is expected to add a more
modest 50 basis points on December 15, taking the base rate to 3.50 percent, a Reuters poll of economists found. In an October poll, the rate was expected to end this year at 3.75 percent.