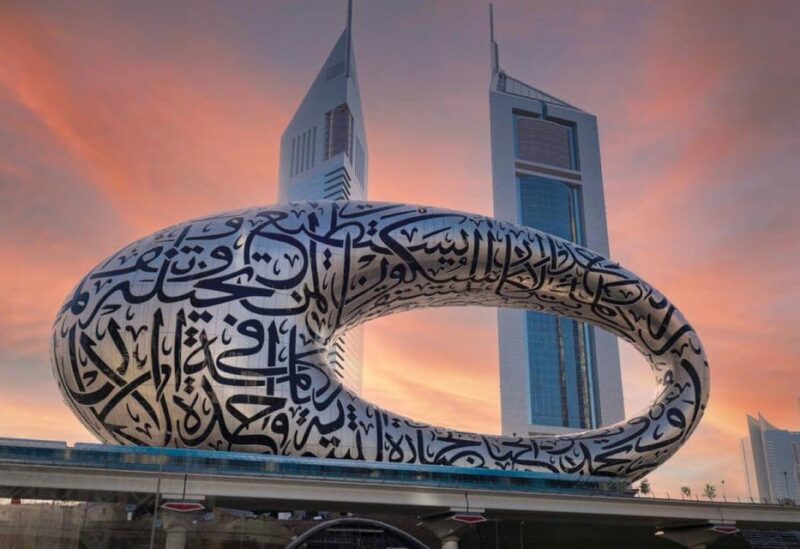 Dubai's Museum of the Future. (WAM)

Dubai’s non-oil sector sustained its growth for the 10th consecutive month and ended the third quarter at its highest three-month average since the end of 2019.

While the seasonally adjusted IHS Markit Dubai Purchasing Managers’ Index slipped to 51.5 in September, from 53.3 in August, output continued to grow. A reading above 50 indicates economic expansion while one below points to a contraction.

“Firms were largely unconcerned about the setback for order books in September, with the expansion in output remaining sharp and close to August’s two-year high,” David Owen, economist at IHS Markit, said. “Moreover, the Expo 2020 has now begun, which should drive increased sales in the services sector over the next six months at least.”

More than three in four companies in Dubai expect Expo 2020 to benefit their business in the fourth quarter of 2021, a survey by the Dubai Chamber of Commerce and Industry found. Business confidence in the emirate reached its third-highest level in 10 years as companies begin to feel the positive impact of the world’s fair that began on October 1, the Business Leaders’ Outlook for Q4 2021 survey said.

Globally, more than 6.5 billion Covid-19 vaccine shots have been provided across 184 countries, according to data collected by Bloomberg’s vaccine tracker. In the UAE, 20.5 million doses have been given, enough to cover 95.2 per cent of the population, the tracker showed.

Dubai’s non-oil companies’ output continued to expand at a strong pace in September, despite the drop in new business. While the rate of growth slipped from August, it was still the second-strongest in over a year.

Outlooks for future output enhanced for the fourth month running, as firms expect the economy to continue to rebound from the pandemic and that Expo 2020 will drive higher sales.

Confidence in the travel and tourism sector reached a five-month high in September and outpaced that seen in the rest of the non-oil sector. Travel and tourism companies saw a sustained upturn in sales in September, which some respondents linked to increased demand in the run-up to Expo 2020.

With business confidence growing, companies continued to employ more people at the end of the third quarter. However, there were signs that the fall in new orders had weighed on hiring, as employment rose marginally and to its least extent in four months, the PMI report showed.

New business fell marginally in September for the first time since February. Weaker demand and discounts at competing firms were behind the drop-in sales, according to the companies surveyed.

The construction sector led the decline, as new work fell for the first time since June, the PMI report showed.