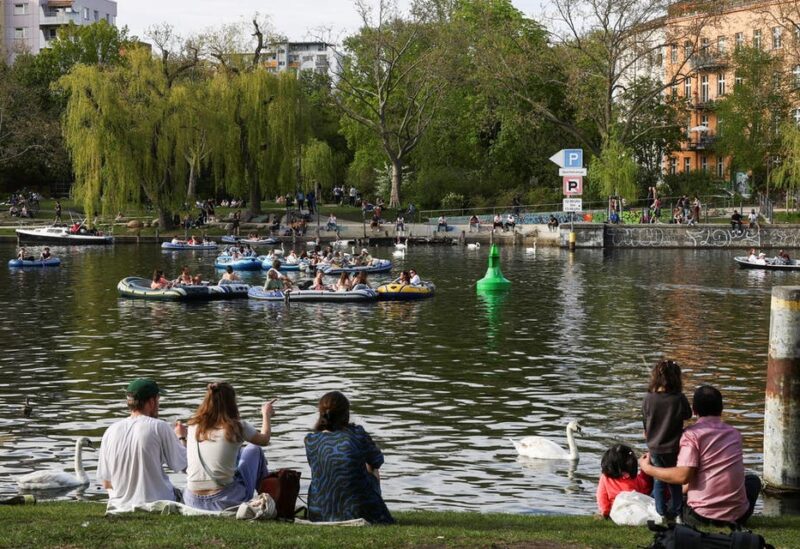 People enjoy the sunny weather on the Landwehrkanal, as the spread of the coronavirus disease (COVID-19) continues, in Berlin, Germany, May 9, 2021. (Reuters)

Germany’s joblessness rate fell to 5.5 percent in August to reach its lowest level since the start of the pandemic, official statistics showed Tuesday.

Seasonally adjusted figures showed the number of unemployed people had dropped by 53,000 people this month, the BA federal labor agency said, as the recovery in Europe’s top economy continues.

The August reading is the lowest since March 2020, when unemployment stood at a record-low five percent before coronavirus shutdowns and mass furlough schemes pummel the economy.

The agency also revised downwards the unemployment rate for July, from 5.7 percent to 5.6 percent.

Germany’s economy has reopened widely since restrictions were eased in May, prompting a flurry of hirings.

Experts say the jobs rally has once again exposed a familiar problem in aging Germany: a lack of skilled workers.

“We need 400,000 immigrants a year” to meet the demands of the labor market, Scheele told the Sueddeutsche newspaper.

“From care workers to air conditioning technicians, logistics and academics: there will be a lack of skilled workers everywhere.”

The country has relied heavily on subsidized short-term work schemes to help businesses and workers whether the pandemic storm, with nearly six million Germans placed on reduced hours at the peak of the crisis in April 2020.

The scheme was still supporting some 1.6 million people according to the latest available figures from June, BA said.

In raw figures, the number of people in unemployment now stands at just under 2.58 million.

Concerns are growing however about a renewed rise in infection numbers in recent weeks, fuelled by the more contagious Delta variant and a slower uptake in vaccinations.

Global supply chain disruptions caused by the pandemic have forced some manufactures, including German carmakers, to trim production in recent months and which could affect employment going forward.