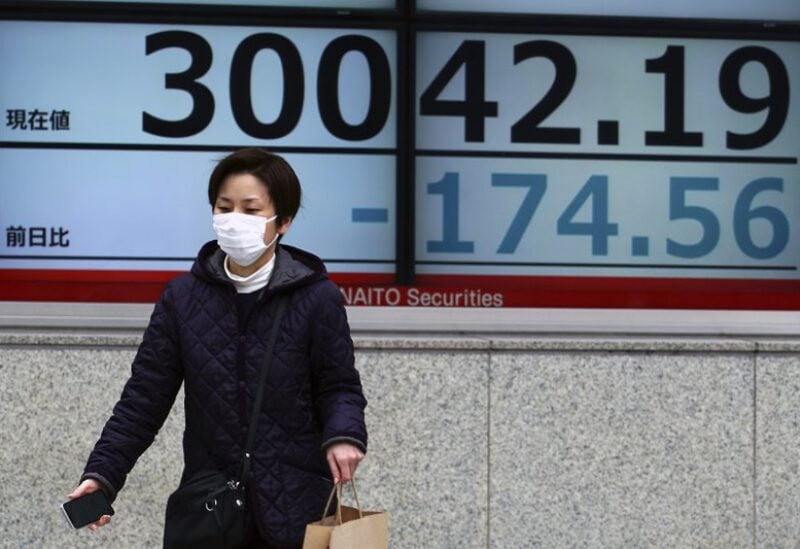 Overnight, Wall Street’s benchmark S&P 500 index closed down 1.5%, putting it on track for its first weekly loss in three weeks. Stocks slipped after bond yields rose, which can prompt investors to shift money out of stocks.

A day earlier, the S&P 500 hit a new high after the Fed promised to keep its key interest rate near zero through 2023 even as it forecast inflation will pick up.

“The rapid rise in long-end U.S. yields has spooked investors,” Stephen Innes of Axi said in a report. The sell-off “caught some investors wrong-footed” after the Fed’s pledge.

Also Friday, Japan’s central left its easy monetary policy and inflation goal of 2% unchanged but widened the band in which long-term interest rates will be allowed to rise or fall around its target to 0.25% from 0.2%.

Investors are swinging between hopes the rollout of coronavirus vaccines will allow global business and travel to resume and fears of possible inflation caused by government stimulus spending and easy credit.

The market’s pullback undercut some of Wednesday’s gains, when the S&P 500 and Dow hit all-time highs after the Federal Reserve said U.S. economic growth should rebound to 6.5% this year — the strongest since the 1980s — and inflation will climb above 2% for the first time in years.

Chairman Jerome Powell said the Fed will keep rates low even as inflation accelerates. Central banks usually try to restrain price rises by hiking rates. But Fed officials have said the U.S. economy will be allowed to “run hot” to avoid derailing a recovery.

Stocks fell back Thursday after the yield on the 10-year U.S. Treasury note, or the difference between its market price and the payout if held to maturity, widened to 1.72%, its highest since January 2020.

In energy markets Friday, benchmark U.S. crude added 4 cents to $60.10 per barrel in electronic trading on the New York Mercantile Exchange. Brent crude, the basis for international oil prices, shed 1 cent to $63.27 per barrel in London.