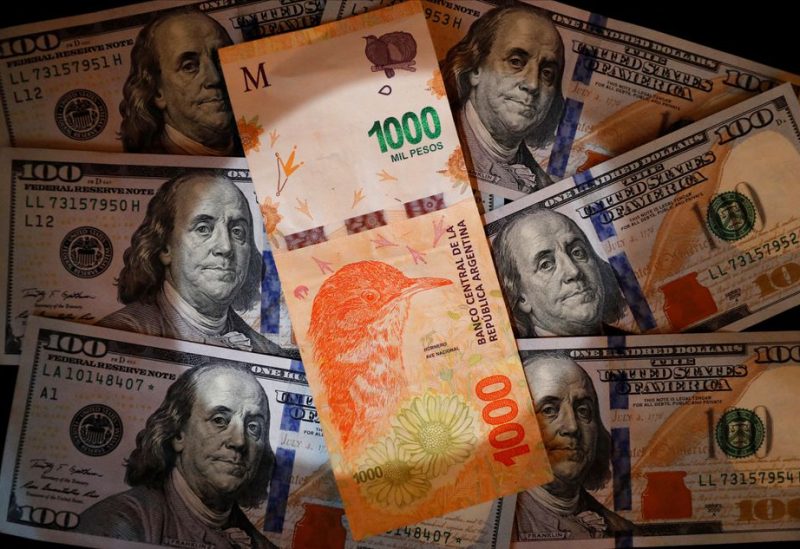 A one thousand Argentine peso bill sits on top of several one hundred U.S. dollar bills in this illustration picture taken October 17, 2022. REUTERS

Jose Zegarra, a Peruvian visitor in Argentina’s capital Buenos Aires, discovered the hard way that the value of the country’s peso isn’t always what it appears to be, as tight capital controls result in a slew of radically varying exchange rates.

When he used his credit card to pay for a lunch, he discovered that his dollar earned him twice as much pesos at one of the city’s thriving money changers at what locals call the “blue” exchange rate.

The South American country imposed controls in 2019 to protect its beleaguered currency, limiting access to dollars and sparking a boom in informal foreign exchange markets where the peso is valued at far below the official rate.

In recent months the government has introduced various additional levies for converting to foreign currency, leading to an explosion of different rates from a so-called “Qatar” World Cup rate for travel to a so-called “Netflix” rate for overseas services like streaming.

The blossoming of parallel foreign exchange rates has gained pace in recent weeks, becoming the target of memes online, one calling the array a “tutti-frutti”. But it also reflects a serious risk the government faces to protect dwindling dollar reserves needed to pay back debt.

Investment bank Morgan Stanley estimated in a September report that the central bank’s liquid net forex reserves had dropped to negative $3.5 billion, something the government has looked to reverse with faster grains sales.

The government and central bank argue that the controls are needed to protect foreign reserves and stabilize the economy. It wants to avoid a sharp devaluation, though the peso has slowly but surely lost some 50% against the dollar this year anyway.

“It is clear that the central bank has a duty to preserve its reserves and that is why it is working hard to do so,” said a central bank source who asked not to be named, adding parallel rates were simply caused by market “supply and demand”.