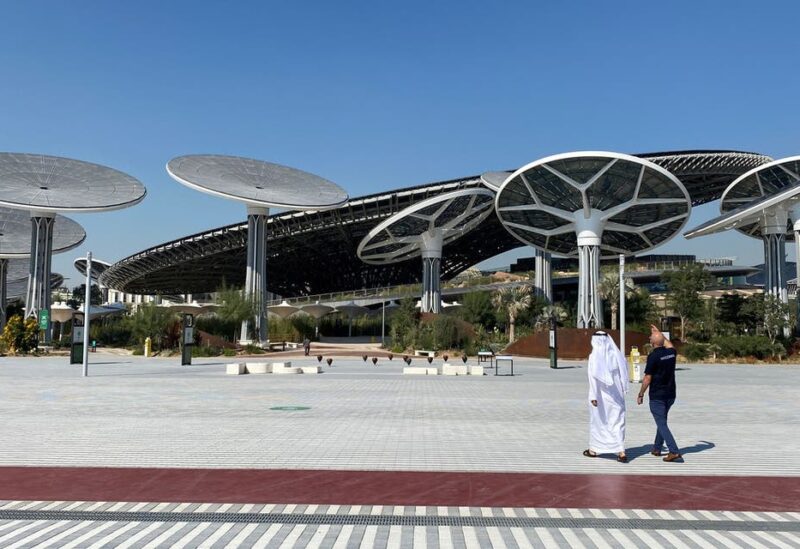 People walk at the site of Dubai Expo 2020 in Dubai. (Reuters)

The Middle East and North Africa are expected to be the only regions in the world to see economic growth accelerate this year, thanks to rising oil prices and a flurry of business-friendly changes, reversing the worldwide trend of decreasing development.

According to Fitch Ratings’ Mena Key Themes 2022 study, the Mena region’s economies are expected to grow 4.3 percent in 2022, up from a projected 3.7 percent in 2021, due to greater oil output and a prolonged recovery in the non-oil sector.

Oil-exporting nations in the area are expected to lead growth, with their economies expanding by 4.4 percent in 2022, up from a projected 3.5 percent in 2021, according to the report.

“Mena will be the only area in the globe to see growth rates rise in 2022,” the rating agency said. “This is in contrast to other regions throughout the world, where growth is expected to decelerate or remain flat.”

Oil prices, which have already risen by approximately 20% this year, are expected to hit $100 per barrel owing to robust global demand, according to market strategists last week. Concerns about supply interruptions caused by cold weather in the United States, as well as political tensions among key international suppliers, have fueled oil price hikes.

Furthermore, the region’s governments are undertaking long-term economic restructuring projects. The United Arab Emirates, the Arab world’s second-largest economy, has embarked on economic, legal, and social structural reforms aimed at strengthening its business environment, attracting foreign investment, attracting high-skilled talent, and incentivizing companies to set up or expand their operations in the country.

According to Fitch, six of Mena’s eight fastest-growing economies would be oil producers by 2022.

Non-oil industries in oil-producing nations will also develop rapidly, thanks to high immunization rates, events such as Expo 2020 Dubai and the Fifa World Cup in Qatar, and spillovers from high oil prices, according to the paper.

The Gulf nations’ economy will expand by about 5% this year, beating North Africa and the Levant, owing to double-digit increase in hydrocarbon output and significant growth in the non-oil sector.

Egypt, the Arab world’s third-largest economy, would grow at a 5.3% annual rate in the fiscal years 2021-2022 and 2022-2023, according to Fitch, owing to a resurgence in investment, increased tourist arrivals, and solid private consumption.

According to the research, the Mena area will see a “two-speed recovery” this year, since many of the smaller economies will not completely recover to pre-pandemic real economic production levels.

Slow vaccination rates and geopolitical threats will be among the reasons weighing on the growth of several nations, including regional “underperformers” Lebanon, Libya, Syria, the West Bank, Gaza, and Yemen.

“Yemen, Syria, Iraq, and Lebanon, which will struggle to recover to 2019 output levels,” Fitch stated, “are among Mena nations with the slowest vaccination rollouts.”
The provision of booster doses is projected to deepen existing gaps in the region’s immunization efforts.

Smaller economies with lower vaccination rates are unlikely to catch up to outperformers like Israel, Bahrain, the United Arab Emirates, and Saudi Arabia.

“This will prolong normalization of activity and keep economic recovery moderate,” according to the research.

The United Arab Emirates led the current Covid-19 global resilience rankings, followed by Cyprus, Bahrain, and Israel. The UAE ranked #1 on the Pandemic Resilience Index 2022, which was developed by the Consumer Choice Centre, a consumer advocacy group located in the United States. The UAE’s victory was aided by mass testing, vaccine approvals, and the delivery of booster injections, among other considerations.

Overall, the Mena region’s budget deficit will fall substantially to 1.9 percent of GDP in 2022, down from an expected 3.6 percent in 2021, the lowest deficit in over a decade.

However, several of the nations dealing with poorer fiscal conditions and significant debt burdens are expected to step up fiscal consolidation measures to address structural weaknesses, according to the report.

Fitch expects the major Mena nations to accelerate their long-term economic transformation efforts due to the easing health crisis, expanding population, and increased emphasis on a green transition.

Countries will focus on enhancing their business environments, attracting foreign investments, and expanding the role of the private sector in the economy, according to the report.

“GCC nations will drive diversification reforms,” according to Fitch.

Oman is anticipated to accelerate privatization initiatives, while Qatar will aim to modernize its regulations in order to attract investors.

“Egypt and Israel will embark on a wave of pro-growth, liberalisation changes,” Fitch said, noting that important areas of concentration would be “agricultural, transportation, telecommunications, and technology.”