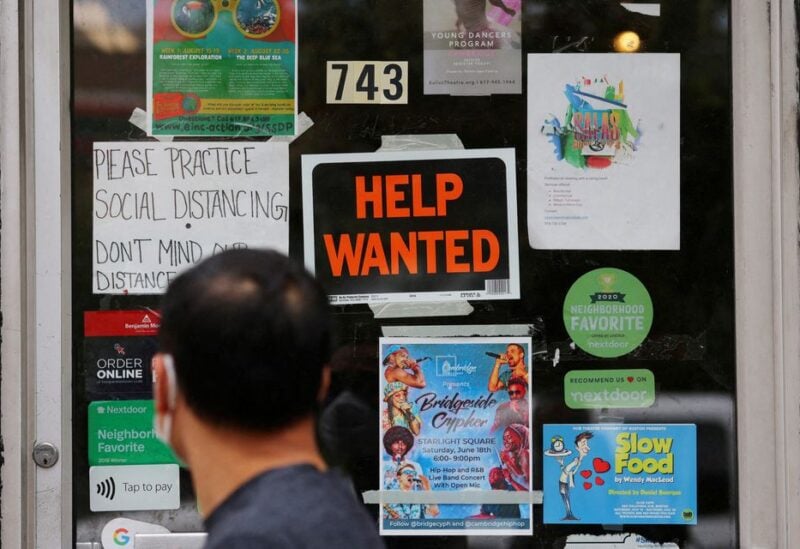 A pedestrian passes a "Help Wanted" sign in the door of a hardware store in Cambridge, Massachusetts, U.S., July 8, 2022. REUTERS

The United States’ job growth slowed somewhat in September, although the unemployment rate fell to 3.5%, indicating a robust labor market that will keep the Federal Reserve on its aggressive monetary policy tightening campaign for the foreseeable future.

Despite the fact that the unemployment rate fell from 3.7% in August to 3.7% in September, fewer Americans worked part-time for economic reasons last month, according to the Labor Department’s carefully watched employment report released on Friday. Despite the Fed’s steep interest rate rises, which are dampening demand, the labor market remains resilient.

“The labor market continues to run stubbornly hot,” said Michael Feroli, chief U.S. economist at JPMorgan in New York. “The super-tight hiring conditions are generating wage and nominal income growth that is inconsistent with getting inflation back down to a more acceptable rate.”

Nonfarm payrolls increased by 263,000 jobs last month after rising by an unrevised 315,000 in August, the survey of establishments showed. While that was the lowest since April 2021, job gains exceeded the monthly average of 167,000 in the 2010s. Job growth has averaged 420,000 per month this year.

The job increases, according to President Joe Biden, are “an optimistic indicator that we are shifting to solid, steady growth.”

Despite the fact that GDP contracted in the first half, the employment data showed that the economy was not in recession. However, the odds of a slump next year are increasing as the Fed intensifies its fight against inflation.

The U.S. central bank has hiked its policy rate from near-zero at the beginning of this year to the current range of 3.00% to 3.25%. September’s consumer price report next Thursday will help policymakers to assess their progress in taming inflation ahead of their Nov. 1-2 policy meeting.

Healthcare added 60,000 jobs in September, returning employment in the sector back to its pre-pandemic level. Employment in the professional and business services industry increased by 46,000 jobs. Manufacturing added 22,000 jobs, while construction created 19,000 positions, despite the housing market being hammered by the higher borrowing costs.

There were also gains in wholesale trade employment, but the financial activities industry shed 8,000 jobs, while the transportation and warehousing sector lost 7,900. Retail employment fell by 1,100 jobs. Government payrolls dropped by 25,000 jobs.

Stocks on Wall Street were trading lower. The dollar rose against a basket of currencies. U.S. Treasury prices fell.