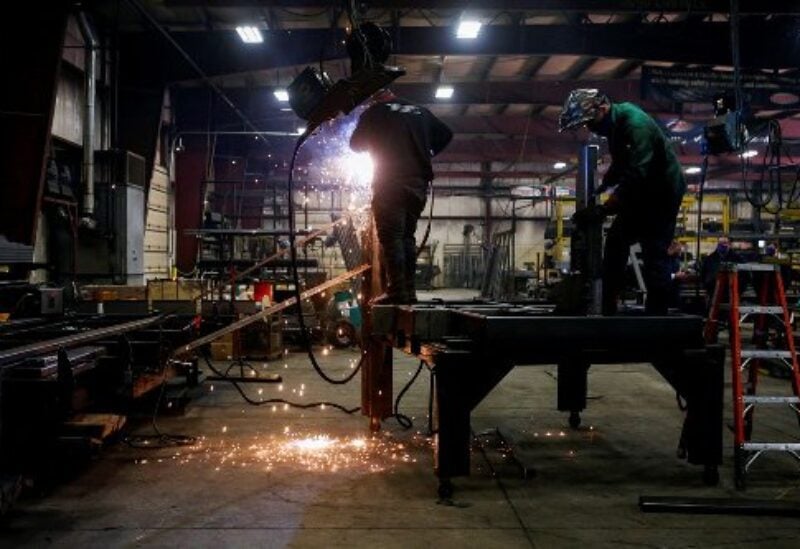 U.S. factory activity gathered speed in early May amid strong domestic demand, but backlogs of uncompleted work are piling up as manufacturers struggle to find raw materials and labor, boosting costs for both businesses and consumers.

Though other data on Friday showed sales of previously owned homes dropping to a 10-month low in April as an acute shortage of houses drove prices to a record high, they remained well above their pre-pandemic level. The housing market and manufacturing have led the economy’s recovery from the COVID-19 recession, which started in February 2020.

Data firm IHS Markit said its flash U.S. manufacturing PMI increased to 61.5 in the first half of this month. That was the highest reading since October 2009, and followed a final reading of 60.5 in April. Economists polled by Reuters had forecast the index dipping to 60.2 in early May.

A reading above 50 indicates growth in manufacturing, which accounts for 11.9% of the U.S. economy.

Demand shifted to goods from services as the pandemic kept Americans at home, causing supply constraints. The virus also disrupted labor at manufacturers and their suppliers, leading to raw material shortages across industries.

More than a third of the population has been vaccinated, allowing the broader economy to reopen. While that, together with nearly $6 trillion in pandemic relief provided by the government over the past year, is unleashing pent-up demand for services, appetite for goods remains healthy.

According to IHS Markit “manufacturers highlighted that strain on capacity and raw material shortages are expected to last through 2021.” It noted that the supply crunch was raising production costs for manufacturers, who “made efforts to pass higher cost burdens on to clients.”

The IHS Markit survey’s measure of prices paid by manufacturers rose to the highest level since July 2008.

Federal Reserve officials generally view the supply chain bottlenecks as transitory and expect them to temporarily drive inflation above the U.S. central bank’s 2% target. There is also acknowledgment that the bottlenecks could take longer to ease.

Minutes of the Fed’s April 27-28 policy meeting published on Wednesday showed “a number of participants remarked that supply chain bottlenecks and input shortages may not be resolved quickly,” and that this “could put upward pressure on prices beyond this year. These officials also “noted that in some industries, supply chain disruptions appeared to be more persistent than originally anticipated.”

According to IHS Market, backlogs of work accumulated early this month at the fastest pace in 14 years. Its measure of new orders increased. Though factories tried to recruit more workers, the pace of hiring was the slowest in five months.

U.S. stocks were trading higher. The dollar gained versus a basket of currencies. U.S. Treasury prices were mixed.

In a separate report on Friday, the National Association of Realtors said existing home sales dropped 2.7% to a seasonally adjusted annual rate of 5.85 million units last month, the lowest level since June. The third straight monthly decline in sales came as transactions fell in the Northeast, West and the densely populated South. Sales rose in the Midwest.

Economists had forecast sales rebounding 2.0%. Home resales, which account for the bulk of U.S. housing sales, were up 20% in the first four months of this year, compared to the same period in 2020. The housing market is being driven by demand for bigger and more expensive accommodations after the pandemic forced millions of Americans to work from home and take classes remotely. But the virus has disrupted labor supply at saw mills and ports, causing shortages of lumber and other raw materials.

That is limiting builders’ ability to ramp up construction of new homes, keeping in place an inventory shortage that is boosting prices and threatening to sideline first-time homebuyers from the market. The government reported this week that homebuilding tumbled in April.

There is hope that the reopening economy could encourage more homeowners to put houses on the market. Some elderly Americans likely delayed downsizing because of the pandemic.

Economists do not believe another housing bubble is developing, noting that the surge is being mostly driven by a mismatch between supply and demand, rather than poor lending practices, which triggered the 2008 global financial crisis.

“The people buying homes have the income and down payments as they are often trading one home for another,” said Joel Naroff, chief economist at Naroff Economics in Holland, Pennsylvania. “And economic growth should remain strong through this year, and while next year it may moderate, it is not expected to falter significantly.”

There were 1.16 million previously owned homes on the market in April, down 20.5% from a year ago. At April’s sales pace, it would take 2.4 months to exhaust the current inventory, down from 4.0 months a year ago. A six-to-seven-month supply is viewed as a healthy balance between supply and demand.