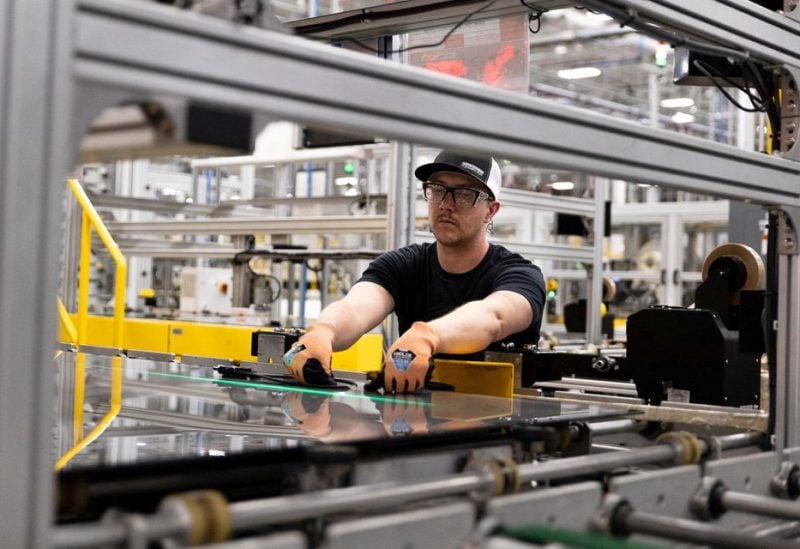 A worker applies tape to a solar panel at First Solar in Perrysburg, Ohio July 8, 2022. REUTERS

The government said on Wednesday that the third quarter saw the U.S. economy recover more robustly than previously anticipated. However, the odds of a recession in 2019 have increased due to increasing interest rates as the Federal Reserve fights inflation.

Other figures showed that the goods trade deficit grew substantially in October while private payroll growth increased at its slowest rate in nearly two years in November. The main support for the economy has been the labor market’s resilience. Last quarter’s growth was aided by a decrease in the import bill.

Gross domestic product increased at a 2.9% annualized rate, the Commerce Department said in its second estimate of third-quarter GDP. That was revised up from the 2.6% pace reported last month. The economy had contracted at a 0.6% rate in the second quarter. Economists polled by Reuters had forecast GDP growth would be raised to a 2.7% rate.

The upward revision reflected upgrades to growth in consumer and business spending as well as fewer imports, which offset the drag from a slower pace of inventory accumulation.

When measured from the income side, the economy grew at a 0.3% rate. Gross domestic income (GDI) had contracted at a 0.8% pace in the second quarter. In principle, GDP and GDI should be equal, but in practice diverge as they are estimated using different and largely independent source data.

The average of GDP and GDI, also referred to as gross domestic output and considered a better measure of economic activity, increased at a 1.6% rate in the July-September period after shrinking at a 0.7% pace in the second quarter.

Profits from current production decreased $31.6 billion in the third quarter after rising $131.6 billion in the second quarter. Profits were, however, impacted by penalties and fines imposed on some businesses by federal and state agencies.

These included a number of broker-dealers and an associated investment adviser, which consented to pay around $1.3 billion in penalties and fines for breaking rules set forth by the US Securities and Exchange Commission on the preservation and maintenance of electronic communications.

Sallie Mae’s successor, Navient, agreed to pay $95 million in compensation to borrowers who were misled into taking out expensive repayment plans and predatory loans.