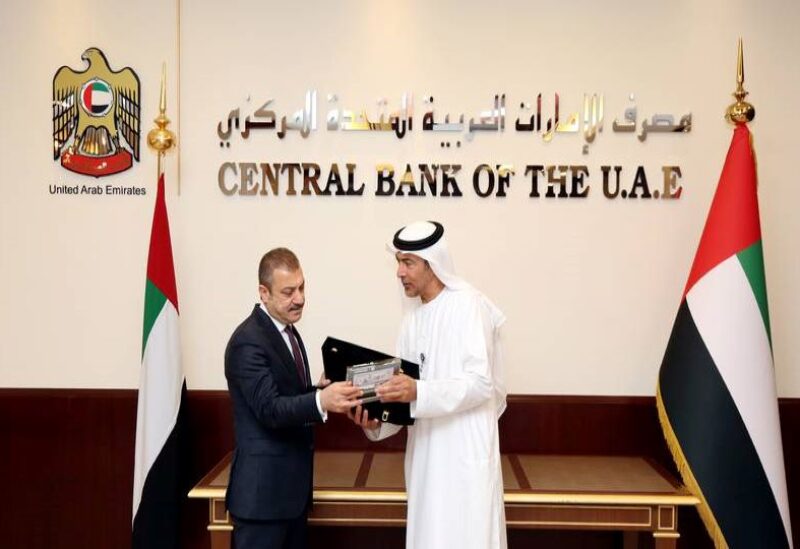 Khaled Balama, Governor of the Central Bank of the UAE, meets his Turkish counterpart Sahap Kavcioglu in Abu Dhab

Following the signing of a bilateral currency exchange agreement between the two nations in January, the Central Banks of the UAE and Turkey are hoping to work even further.

The United Arab Emirates and Turkey have agreed to collaborate in 13 domains and industries.
The United Arab Emirates has established a $10 billion fund to assist Turkish projects.
During Turkey’s President Recep Tayyip Erdogan’s two-day official visit to the Emirates earlier this week, CBUAE Governor Khaled Balama met with his Turkish counterpart Sahap Kavcioglu in Abu Dhabi.

The governors talked about measures to improve collaboration in the financial and banking sectors, according to the CBUAE.

The bilateral currency swap agreement intends to help the UAE and Turkey improve their trade and investment links.

According to the CBUAE, the arrangement between the UAE dirham and the Turkish lira is worth Dh18 billion ($4.9 billion) and 64 billion Turkish lira ($4.7 billion).

A foreign currency swap is an agreement between two parties to exchange money in which the principle and interest payments on a loan in one currency are swapped for a loan in another currency of equal value.

The agreement will be in place for three years, with the possibility of an extension if both parties agree.

During Mr Erdogan’s first official visit to Turkey in nearly a decade, the UAE and Turkey inked multiple agreements and protocols in a variety of disciplines, including health and medical sciences, sea and land transport, advanced industries and technology, climate action, and culture.

Following meetings between Sheikh Mohamed bin Zayed, Crown Prince of Abu Dhabi and Deputy Supreme Commander of the Armed Forces, and Mr Erdogan in November, the UAE established a $10 billion fund to assist investments in Turkey.

The investment fund will focus on vital areas including as energy, health, and food in order to provide support for the Turkish economy.