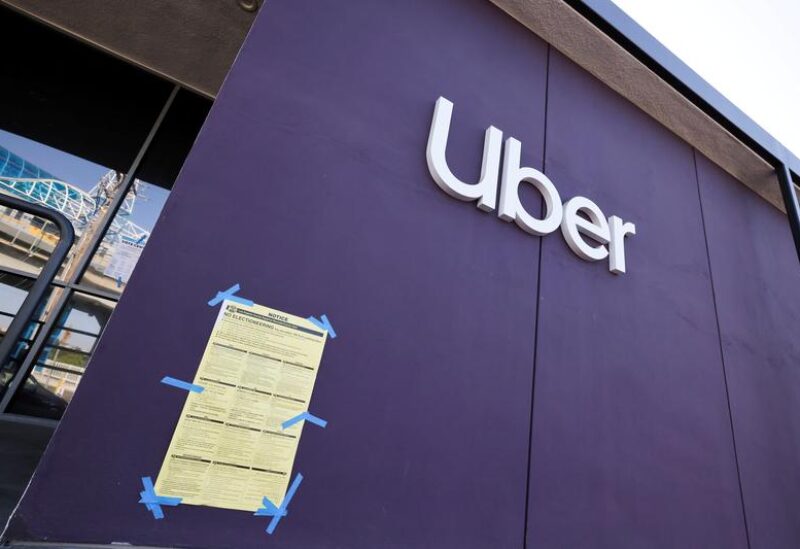 An Uber logo is seen during the global outbreak of the coronavirus disease (COVID-19), in Redondo Beach, Los Angeles, California, U.S., November 2, 2020. REUTERS

Uber Technologies Inc announced that it would pay drivers more to get cars back on the road as the U.S. economy recovers from the COVID-19 pandemic, and disclosed a $600 million charge to provide UK drivers with benefits, a sign of the possible costs if the United States requires more driver compensation.

Uber shares were down 4.6% in after-hours trade. The stock dropped 3.4% during the regular session after the administration of U.S. President Joe Biden blocked a Trump-era rule affecting gig workers.

The speed and cost of business recovery is of key interest to investors, and Uber executives said on Wednesday that the take rate, the share Uber takes in fees from each ride, would drop from the previous quarter to a 20% range. Taking a lower cut will allow Uber drivers to earn more, but weigh on Uber’s second-quarter mobility revenue and profitability.

Atlantic Equities analyst James Cordwell said shares fell after hours due to the pressure on the take rate and implicit driver incentives.

The food-delivery business continued to grow in the first quarter, but ride-hail bookings were flat from the previous quarter.

Furthermore, the ride-hailing mobility business had to absorb a $600 million hit to account for a settlement with its more than 70,000 UK drivers and provide them with more benefits.

Haris Anwar, senior analyst at Investing.com, said “the company’s bottom line has been hurt by the ruling in the UK which raised expenses and reminded investors that a similar move in the U.S. could have a much bigger impact.”

Uber posted an adjusted $359 million first-quarter loss before interest, taxes, depreciation and amortization – a metric that excludes one-time costs, including stock-based compensation, narrowing losses by around $100 million from the previous quarter.

Analysts on average had expected the company to report an adjusted EBITDA loss of nearly $452 million, according to Refinitiv data.

Uber has pledged to be profitable on that metric by the end of the year, 3 months after its smaller ride-hail rival Lyft Inc, which on Tuesday said it would report sustained adjusted profits starting in the 3rd quarter.