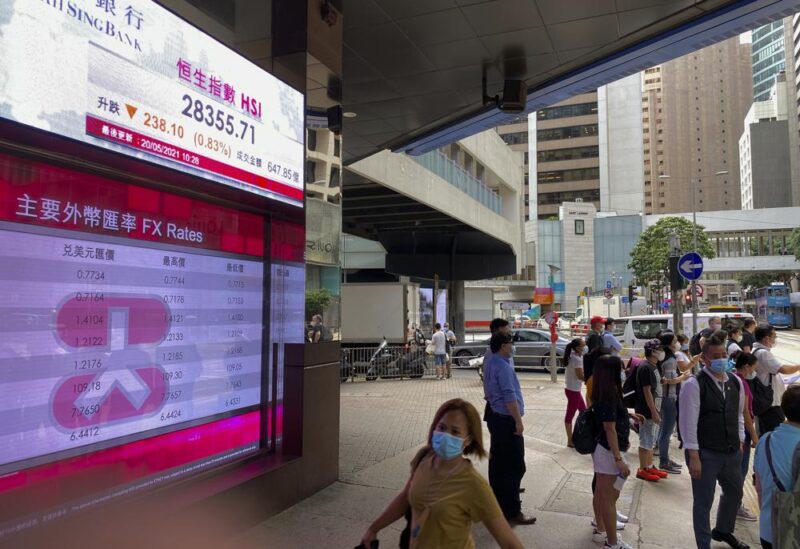 People stand near a bank's electronic board showing the Hong Kong share index at Hong Kong Stock Exchange Thursday, May 20, 2021. Shares were mixed in Asia on Thursday after benchmarks closed broadly lower on Wall Street in a third day of retreat. (AP Photo/Vincent Yu)

BANGKOK: World shares were mixed Thursday as Japan reported strong trade data signaling a recovery in demand from the pandemic.

Stocks rose in Paris, London, Tokyo and Sydney but fell in Hong Kong, Seoul and Shanghai. U.S. futures were lower. The prices of Bitcoin and other cryptocurrencies steadied.

Japan’s government reported that exports rose 38% in April from a year earlier while imports climbed nearly 13%, indicating a recovery in overseas demand even as the country weathers its worst bout of coronavirus outbreaks so far.

Exports to the U.S. rose 45% while those to China jumped nearly 34% in a strong rebound after last year’s shocks from lockdowns and other precautions taken to curb the pandemic. The data showed robust growth in shipments of machinery, vehicles, cars and chemicals.

While better than forecast, the figures largely reflect the low base from the depths of the pandemic lockdowns in 2020. Exports are likely to rise at a slower pace going forward, said Tom Learmouth of Capital Economics.

“While export volumes edged higher in April, the rebound in exports is slowing and external demand is unlikely to provide much of a tailwind to growth over the coming months,” he said in a commentary.

Bank stocks and companies that rely directly on consumer spending pulled the market lower, but energy sector stocks, the biggest gainers so far this year, bore the heaviest losses as the price of U.S. crude oil skidded 3.5%.

On Thursday, U.S. benchmark crude oil added 33 cents to $63.68 per barrel in electronic trading on the New York Mercantile Exchange. It dropped $2.50 on Wednesday to $63.35 per barrel. Brent crude, the international standard for pricing, rose 22 cents to $66.88 per barrel.

Bitcoin’s gyrations followed the news that longtime Bitcoin advocate Tesla would no longer accept it as payment for its cars, reversing its earlier position.

Investors remain focused on whether rising inflation will be temporary or whether it will endure. Prices are rising for everything from gasoline to food as the economy recovers from its more than year-long malaise.

The fear is that the Federal Reserve will have to dial back its extensive support if inflation persists. That includes record-low interest rates and the monthly purchase of $120 billion in bonds meant to goose the job market and economy.

Treasury yields mostly rose. The yield on the 10-year Treasury note slipped to 1.66% from 1.67% late Wednesday.