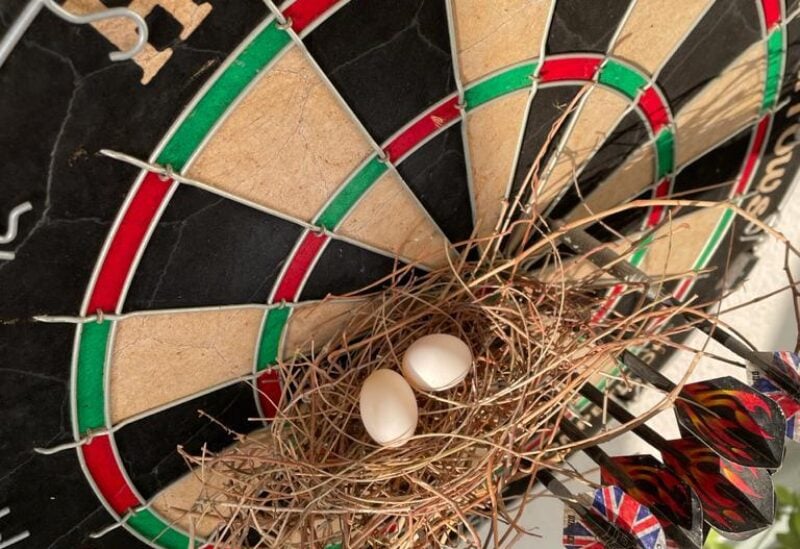 A couple in Dubai recently discovered a pair of laughing doves nesting on their balcony using an old rusted dart board as their unusual home of choice.

Antony Abraham, 34, said the doves spent days weaving an intricate nest from twigs intertwined with six darts that shot out horizontally from the board at their home in Al Wasl Villas in Muhaisnah.

Hovering about six feet above ground, the small pigeons, which are resident breeders in Africa and the Middle East, set up home on the balcony about two months ago.

Recently, the couple spotted two eggs in the nest which are due to hatch any day now.

“We noticed the birds flying on to the balcony and scoping out the board before perching on the darts,” said Mr Abraham, from India.

“It started to become a regular sitting spot for them so I pushed the darts further into the board to make them more secure. Soon after, they started bringing twigs and placing them on top of the darts.

“I was skeptical at first as I didn’t think it would be a secure nesting place, but it’s a solid nest and the twigs are intertwined tightly with the darts.”

As is typical with this breed, they often nest on and around houses and surrounding structures.

Both parents build the nest, with males bringing the twigs, which are then placed by the female.

For the first few weeks, Mr Abraham, a resource manager in Dubai, said every time they went on the balcony, the doves would appear panicked and fly away.

But soon after, they did not seem bothered by the couple as they kept at least a metre distance from the nesting platform and eggs.

“We first noticed the eggs about two and a half weeks ago and after a bit of research, we expect them to hatch pretty soon,” he said.

“We live in a residential community that has a lot of greenery and a community garden and farming area, so I guess the landscape appealed to them.

“I’m glad the dart board is being used for something worthwhile. It’s quite cool that they’ve chosen it as a home for their new hatchlings.”

Since the eggs were laid, Mr Abraham said he had kept a close eye on the nest to ensure they were safe from cats or other animals.

And, he said, the doves very much divided their parenting duties equally.

“The male and female trade off time sitting on the eggs,” he said.

“When they fly off, one doesn’t go far and they observe from either the fence or nearby bush.

“After they hatch, they usually stay in the same place feeding and nursing the babies for about a month before they can fly.