9 things everyone does on video calls (but won’t admit) 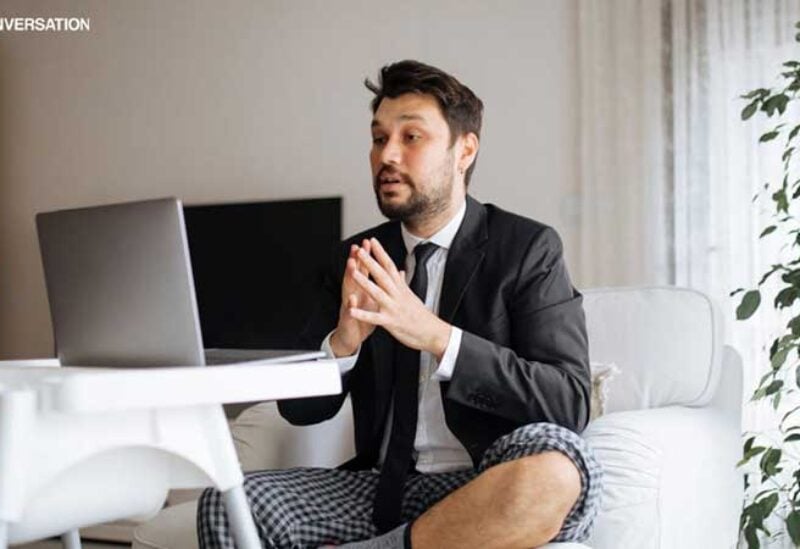 In findings that will surprise absolutely no one, new research commissioned by Otter has revealed nearly a third of people who have been working from home during the pandemic have worn pyjamas during virtual meetings.

After a year of endless online catch-ups and conference calls, sporting PJs for professional meetings is just one of the weird things we now consider normal whenever we join a digital discussion.

Here are nine other things everyone secretly does during video calls…

1. Looking at yourself too much

For some people, it’s a nightmare. ‘Why do I look so haggard?’ they wonder as they’re forced to gaze at their own reflection for hours on end.

For others, it’s a delight. ‘I’m so glad I bought that ring light and tripod at the start of the pandemic, this angle is so flattering,’ they muse, while everyone else silently seethes with envy.

Don’t want anyone else to stare at your unwashed face and unbrushed hair? No problem, just pretend that you’re having technical difficulties and can’t get your camera to turn on

3. Not concentrating on the meeting

‘Sorry, I was just checking on the minutes of the last meeting,’ you lie when your boss asks you a question and it’s obvious you weren’t listening to their scintillating presentation. You were, in fact, scrolling through the #dogsofInstagram hashtag and trying not to squeal at all the cuteness.

Just because you can only see the top half of people’s outfits doesn’t mean you can’t play virtual fashion police, mentally allocating each of your colleagues’ loungewear looks to the best or worst dressed list.

You wouldn’t normally get to see inside most of your co-workers’ homes, but now you can and it’s so much fun. You feel like Lloyd Grossman going ‘Through The Keyhole’ and checking out their interior decor choices.

6. …and their Zoom etiquette

There’s always one person who slurps their coffee loudly or – God forbid – eats on the call and doesn’t go on mute. A year into the pandemic, you wish these people had got the memo about appropriate video call etiquette.

Maybe you want to source some of that jazzy wallpaper your colleague’s got in their lounge. Maybe you want to show that rather attractive client to your best mate. There’s an art to taking a photo of your computer screen with your phone camera without anyone noticing, but you’ve nailed it.

8. Getting annoyed at people

It’s bad enough when people hog the conversation during meetings IRL, but when it’s a virtual affair, they’re even more annoying, because it’s so much harder to get them to shut up. And when the ‘Zoom fatigue’ sets in after a day of back-to-back calls, it’s enough to drive you mad.

9. Making up excuses to leave

This is where having kids comes in really handy, because there aren’t many legitimate reasons that you have to leave a video call when you’re in the midst of lockdown. If in doubt, you can always resort to the fake tech problems, to make a swift and stealthy exit