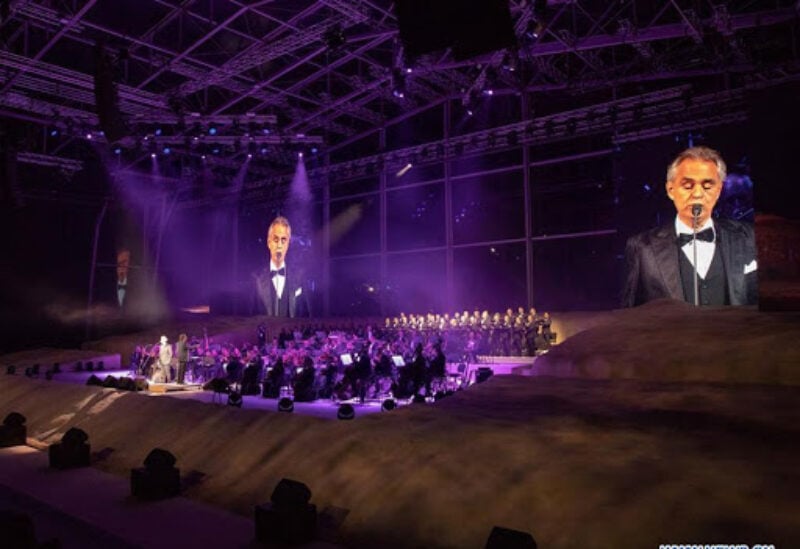 Andrea Bocelli is no stranger to Saudi Arabia,having performed twice in AL Ula at the Winter at Tantora festivals. Now, he’s set to return to the kingdom to perform an intimate concert at the ancient site of Madain Saleh,  also known as Hegra, on April 8.

This will mark the first time the Unesco World Heritage Site will be used as the setting for a musical event.

Joining Bocelli on stage for the stripped-back performance will be musicians from the Arabian Philharmonic and special guests Loren Allred, Matteo Bocelli, soprano Francesca Maionchi and Eugene Kohn at the piano. There will also be a special mystery guest, who will be revealed on the night.

While the set list has not been announced, fans will likely be able to hear some of Bocelli’s classics, including The Prayer, Ava Marie and Time to Say Goodbye.

The Fall on Me singer will be the first artist to stage a concert within the city walls of Hegra. The ancient city, built in the first century BCE by the Nabataean Kingdom, is an ancient desert city home to thousands of tombs cut into sandstone mountains. At least 100 tombs have elaborate carved facades, showing off the skills of Nabataean craftsmen.

The specific backdrop for the event will be the 20 carved tombs of Al Khuraymat, which archaeologists say represent some of the best preserved in the city of Hegra.

Ticket go on sale on Thursday and will be limited as the show will have less than 300 spectators to protect the environment, as well as for Covid-19 safety reasons.

If you can’t make it to the event, however, the concert will also be broadcast uninterrupted on MBC 1 at 10pm (Saudi Arabia time).