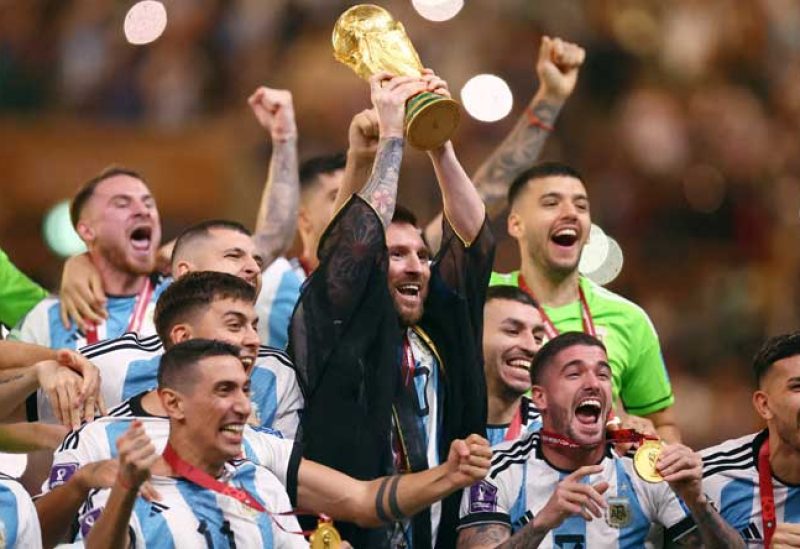 Argentina's players celebrate their victory at the end of the World Cup final soccer match between Argentina and France at the Lusail Stadium in Lusail, Qatar, Sunday, Dec. 18, 2022. (AP)

Argentina won their third World Cup in extraordinary style on Sunday, beating France 4-2 in a penalty shootout after Lionel Messi scored twice in a 3-3 draw that featured a hat-trick for Kylian Mbappe as the holders recovered from 2-0 down after 80 minutes.

It was an incredible night of drama and fluctuating fortunes, delivering one of the all-time great finals to cap a wonderful tournament.

Argentina had looked to be cruising to a one-sided victory after Messi’s penalty and a brilliant goal by Angel Di Maria in the first half put them in total control but Mbappe converted an 80th-minute penalty and volleyed in an equalizer a minute later to take the game to extra time.

Messi put Argentina ahead again but Mbappe levelled with another penalty, becoming the second man to score a World Cup final hat-trick after Geoff Hurst for England 1966.

That took the game to a shootout where Argentina keeper Emiliano Martinez saved Kingsley Coman’s penalty and Aurelien Tchouameni fired wide to give Gonzalo Montiel to chance to win it, which he gleefully took.

It meant that after his record 26th World Cup match, at the fifth and final time of asking, the 35-year-old Messi finally claimed the trophy that he and his nation demanded, lifting him up alongside Diego Maradona after the country’s first football God carried them to their emotional second triumph in 1986 following their first in 1978.

It had all looked to be going so smoothly earlier.

Di Maria, with just a few minutes under his belt since the group stage, looked dangerous from the start and when he left Ousmane Dembele flailing with a neat turn, the flummoxed Frenchman clumsily tripped him from behind after 23 minutes. Messi took the penalty, calmly steering the ball low beyond Hugo Lloris and then Di Maria took center stage again after 36 minutes when he finished off one of the best goals to grace a final.

Nahuel Molina cushioned a first-time clearance to Alexis Mac Allister, who instantly played the ball to Messi. The captain changed the direction of attack with a great turn and layoff on halfway, Julian Alvarez clipped it back to Mac Allister, who advanced and slid the ball perfectly across the field for Di Maria to take in his stride and slot home.

France had barely had a kick and coach Didier Deschamps took decisive action, hauling off Oliver Giroud and Dembele and throwing on Marcus Thuram and Randal Kolo Muani after 41 minutes.

It made little impact until they were given a lifeline in the 80th minute when Nicolas Otamendi tripped Kolo Muani and Mbappe, previously anonymous, expertly converted the penalty.

A minute later he swept in a brilliant equalizing volley after combining cleverly with Thuram, stunning the massed Argentine fans watching their team concede two quick-fire goals for the third time in the tournament.

Argentina regained the lead after a counter-attack when the tireless Lautaro Martinez smashed a shot at Lloris and Messi pounced on the rebound, technology confirming the ball had crossed the line.

The drama was not over, however, as Mbappe hammered a shot against the arm of Montiel to produce another penalty in the 117th minute, which he calmly dispatched.