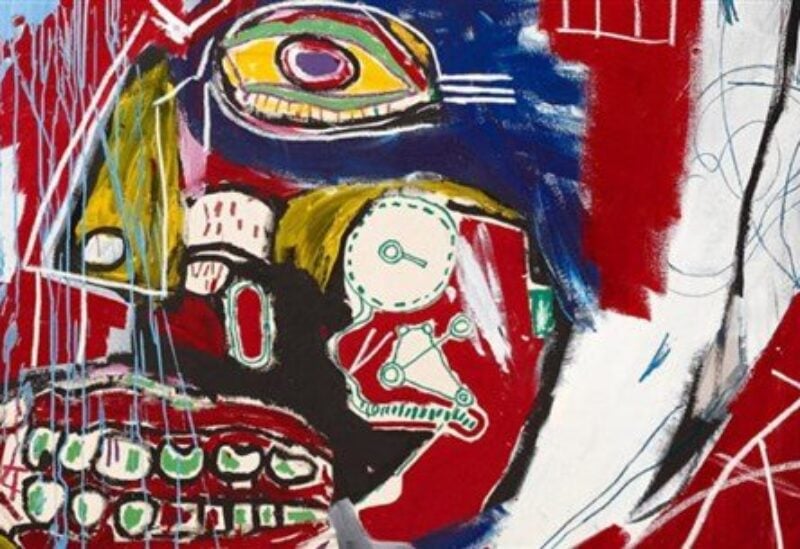 A Jean-Michel Basquiat painting has been auctioned off for $93.1 million – almost double the price experts were expected it to go for.

The 1983 artwork, titled ‘In this Case’, went under the hammer at Christie’s in New York on Tuesday night.

The giant acrylic painting, which measures almost two meters tall, depicts a skull on a red background and was estimated to fetch $50 million.

However, it sold to an unidentified buyer for a staggering $81 million, but with fees and commissions the final price is $93.1 million.

In a sign of Basquiat’s growing status in the art world, the same canvas was reportedly bought by Valentino chairman Giancarlo Giammetti in November 2002 for just $999,500 – barely more than a hundredth of the price paid on Tuesday.

Giammetti has not publicly spoken about why he decided to part with the work which has now netted him a gigantic profit after almost two decades.

The painting was seen hanging in pride of place inside his plush $18.5 million penthouse during a Architectural Digest photoshoot.

Basquiat – a black New Yorker who died of a heroin overdose in 1988 at the age of 27 – frequently addressed themes such as police brutality and the African-American experience in his artworks.

As those issues gain more attention in the national conversation, the price of Basquiat’s paintings has skyrocketed in the past five years.

‘In This Case’ is the third most expensive Basquiat work ever sold.

It was the most expensive artwork sold in 2020.

It was the sixth most expensive artwork ever sold at auction.

According to Basquiat, the work symbolized ‘the challenges of being a black man in white dominated world’.

In recent years, Basquiat’s work has also been licensed for use on Coach handbags, Reebok shoes and Uniqlo t-shirts as his work has been reevaluated in the wake of a racial reckoning.

‘Basquiat is one of the strongest markets coming out of the pandemic,’ art dealer Christophe van de Weghe told The New York Times.

‘It’s worldwide. You can sell Basquiat, like Picasso, to someone in India or Kazakhstan or Mexico. You can have a 28-year-old spending millions on Basquiat and you can have a guy who is 85. He appeals to all kinds of people, from rappers to hedge-fund guys.’

Leonardo DiCaprio, Bono, Jay-Z, Johnny Depp and Tommy Hilfiger are just some of the celebrities to own or have owned a Basquiat.

Gerard passed away in 2013, with the Estate of Jean-Michel Basquiat reportedly worth $45 million at the time.

The Estate is now administered by Basquiat’s sisters, Lisane Basquiat and Jeanine Heriveaux, but its exact value is not known.

The Estate has a lucrative agreement with Artestar – a New York company which licenses Basquiat’s imagery to various fashion brands. Its believed those deals have netted the Estate tens of millions of dollars alone in recent years.