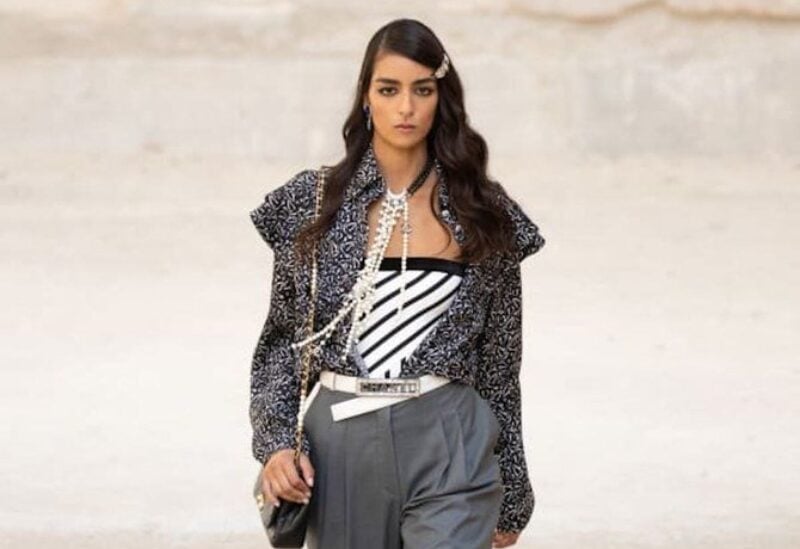 British-Moroccan model Nora Attal strutted her stuff on a runway in the south of France for Chanel’s resort 2022 show on Tuesday.

The 21-year-old walked down the catwalk, staged in Carrières de Lumières – a series of vast chambers – in the sunny Les Baux-de-Provence, wearing two looks from the Parisian luxury maison’s latest offering.

For her first turn down the punk-inspired runway, Attal wore an all-black look that consisted of a fringed top, skirt and cape secured around her neck.

She later changed into loose grey trousers, paired with a striped bodysuit and a graphic shirt.

In a press release, Chanel’s creative director Virginie Viard listed some of the elements of the collection: “Lots of fringes, in leather, beads and sequins, t-shirts bearing the face of the model Lola Nicon like a rock star, worn with tweed suits trimmed with wide braids and pointed silver Mary-Janes. ”

The monochromatic collection drew inspiration from Jean Cocteau’s play “Orpheus,” which deals with themes of morality, sacrifice and artistry. In fact, Cocteau was a friend of Coco Chanel and his 1960 film version, titled “Testament of Orpheus,” was shot at Carrières de Lumières.

Attal is a Chanel house favorite, having appeared on the catwalk for the French label on a number of occasions. She made her debut for Chanel in 2017 and went on to become a runway fixture and house muse, walking for the brand’s 2018 pre-Fall Metier’s d’Art show in Hamburg and most recently in the Spring 2021 runway presentation.

She also served as the face of the brand a number of times, starring in Chanel’s Spring 2019 campaign and Chanel Beauty holiday adverts.

Attal was first discovered by Jonathan Anderson, founder of the J.W. Anderson label, and shot a campaign for the British fashion house in 2014 before she had even taken her first steps down a runway.

Based in London and signed to Viva Model Management, she has worked with a number of renowned designers and photographers and has walked the runway for major fashion houses, including Fendi, Burberry and Valentino.