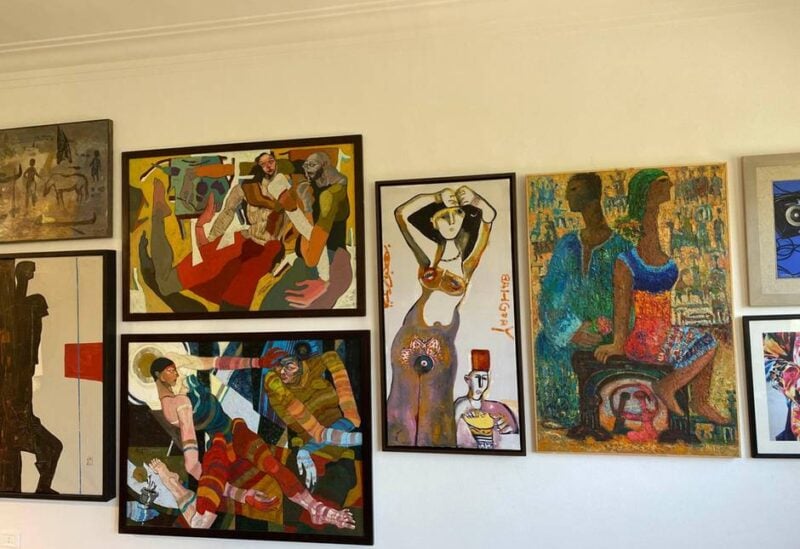 It is a few minutes before 1pm on Tuesday at the ArtTalks gallery in Cairo and founder Fatenn Mostafa-Kanafani is busily putting the finishing touches on a charity exhibition featuring 65 artists in support of the children of Palestine.

One artist arrives with a painting that is yet to be framed and another comes in with freshly printed T-shirts featuring a drawing of the late Ghassan Kanafani, the Palestinian author and leading member of the Popular Front for the Liberation of Palestine who was assassinated in 1972.

Mostafa-Kanafani, whose husband is the nephew of the Palestinian activist, says she and her team put the show together in a handful of days in light of the recent violence in Gaza.

Devastating Israeli airstrikes during the 11-day conflict killed more than 240 Gazans, including 66 children, destroyed hundreds of buildings and forced more than 100,000 people from their homes.

“I think a lot of us were feeling helpless as to what we can do to help,” Mostafa-Kanafani tells The National. “We had to come up with a creative idea and, at the end of the day, art is one means of resisting and making a statement.”

She started contacting many established and emerging artists in Egypt, some she knew and some she had never met before, and “the response was overwhelming”.

Every piece from the show is on sale with all of the proceeds – 50 per cent from the artists and 50 per cent matched by an anonymous donor – going to the Ghassan Kanafani Cultural Foundation, a non-profit, non-governmental organisation established in 1974 to support Palestinian refugees in Lebanon.

The foundation has six kindergartens, two habilitation centres, three children’s libraries, an art centre and clubs within or near Palestinian refugee camps.

“This is not political fundraising. This is humanitarian fundraising to salvage the dramatic consequences that so many Palestinian kids are suffering from,” Mostafa-Kanafani says.

The name of the exhibition, Doko al Jidran (Knock on the Walls), refers to a powerful scene in Kanafani’s 1962 novel Men in the Sun.

In the book, three Palestinians hide in an empty water tank in the back of a lorry to be smuggled across the border in search of a better life away from occupation. Before they reach their final destination, the driver opens the tank only to find they have died in silence.

The driver shouts: “Why didn’t you knock on the tank’s walls? Why? Why? Why?”

“The idea here is that we, the artists of Egypt, are knocking on the walls so that people can hear Palestinians’ struggles and tragedy,” explains Mostafa-Kanafani.

If all are sold, the proceeds will total $310,000. That excludes a 1970 piece by the late Egyptian painter and women’s activist Inji Efflatoun donated by a private collector, which would add another $150,000.

The most expensive piece from a living artist is 2020’s Lost Heritage by multimedia Egyptian artist Moataz Nasr, a floral geometric design made up of 10,000 matches covered by plexiglass.

“This is the least that we can do,” Nasr, 59, tells The National. Palestinians “are not even treated as second-class citizens … This kind of discrimination – making a difference between one human being and another – is really something very, very bad.”