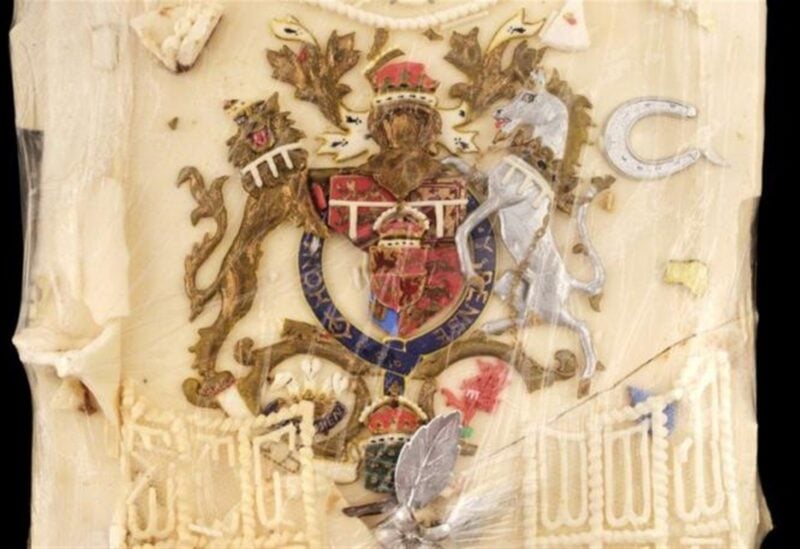 A slice of Prince Charles and Lady Diana Spencer’s wedding cake has sold for £1,850 at auction.

It was given to Moyra Smith, a member of the Queen Mother’s household at Clarence House, who preserved the topping with cling film.

The slice is from one of the 23 official wedding cakes and features a sugared onlay of the royal coat-of-arms coloured in gold, red, blue and silver.

The cake was bought by Gerry Layton in Leeds who bid online.

It was expected to raise just £500 but auctioneers said they were “amazed” at the interest.

Mr Layton, a luxury boat charterer, said he has put in his will the cake along with his estate is to go to charity after his death.

“I also thought that I could put it up as a raffle prize with some of the money going to Centrepoint, which Princess Di was patron of,” he said.

“I will have to think of a way to stop myself from trying to eat it though.”

Mr Layton said he planned to make the trip from Yorkshire to Gloucestershire to collect the cake next week, as he wanted to ensure it remained in good condition.

The auctioneers said bidders from the UK, USA and several countries in the Middle East had shown interest.

“It seemed to get far more attention than when we sold it with a Charles and Diana thank-you letter 13 years ago,” said royal memorabilia specialist Chris Albury, of Dominic Winter Auctioneers in Cirencester, Gloucestershire.

“The bidding started at £300 and with commission bids, the internet and phone bidding quickly rose to the winning price of £1,850.

“This was an irresistible piece of royal memorabilia history for many.”

Mrs Smith kept the slice in an old floral cake tin and taped a handmade label to the lid, reading: “Handle with Care – Prince Charles & Princess Diane’s [sic] Wedding Cake,” which she signed and dated 27 July 1981.

Her family sold the cake to a collector in 2008 and it has now come up for auction 40 years after Charles and Diana were married.

The Prince of Wales and Lady Diana Spencer, who became Diana, Princess of Wales, married at St Paul’s Cathedral on 29 July, 1981