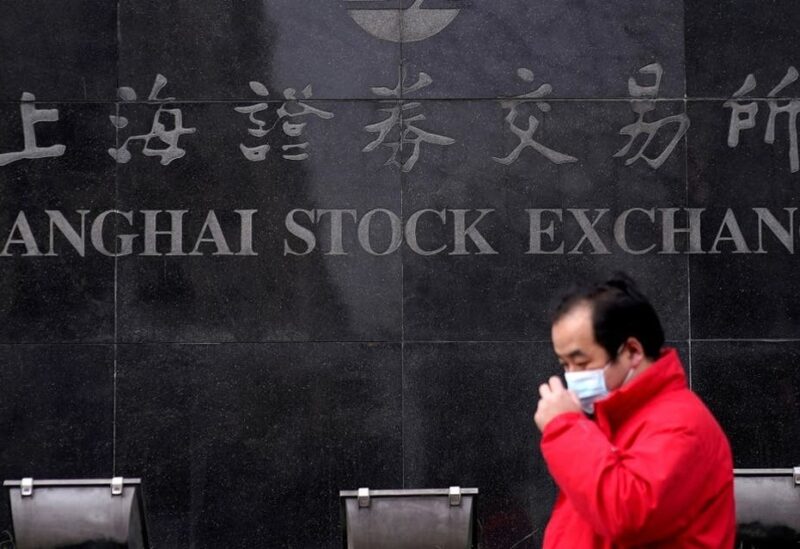 A man walks past the Shanghai Stock Exchange building at the Pudong financial district in Shanghai, China. (Reuters)

Chinese technology shares dipped in the afternoon following a report by Dow Jones that China will propose new regulations to block companies with large amounts of sensitive consumer data from floating shares in the US.

The Hang Seng Tech Index fell 0.8 percent as of 3:05 p.m. in Hong Kong after rising as much as 2 percent in the morning. The regulators said that the rules target companies seeking foreign listing via units incorporated outside the country, Dow Jones reported, citing people familiar with the matter.

Tech giant Alibaba Group Holding extended its loss to as much as 5.2 percent and Tencent Holdings Ltd. also slid further to 2 percent. Meituan dropped 1.2 percent after gaining as much as 3.4 percent earlier.

“The all-clear signal is still some ways off in the ongoing Chinese regulatory reform,” said Justin Tang, head of Asian research at United First Partners.

“At some point, there will be light at the end of the tunnel, it’s just not now.”

Cyberspace Administration of China said in early July that companies holding data on more than 1 million users must now apply for cybersecurity approval when seeking listings in other nations because of the risk that such data and personal information could be “exploited by foreign governments.”

Its “not surprising given that data security is a key issue that will likely be brought up as US and China potentially restart discussions on auditing oversight of US IPOs,” Marvin Chen, an analyst at Bloomberg Intelligence said.

Despite the Friday afternoon selloff, Chinese technology shares headed for their biggest weekly advance in seven months as traders hunted for bargains after a sharp drop in valuation in the sector.

Meanwhile, China’s CSI 300 Index closed 0.5 percent higher, led by industrial and materials stocks. It had earlier gained as much as 1.3 percent.