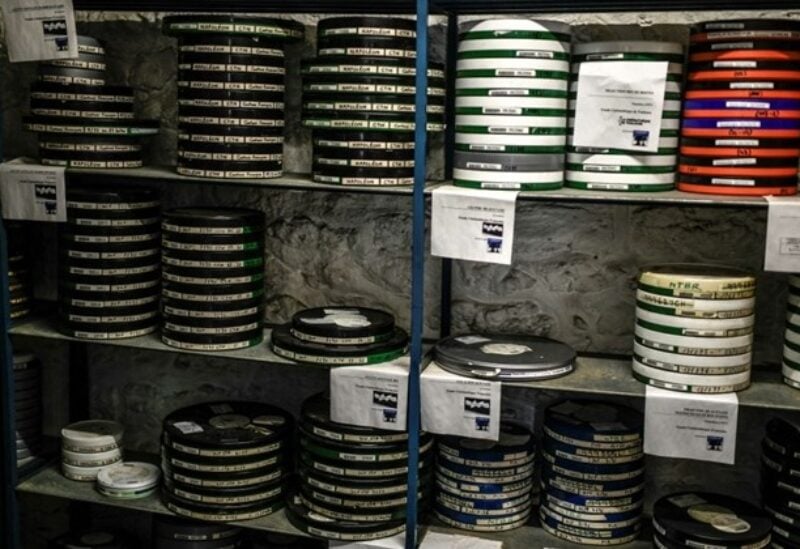 A film editor works on the reconstruction of the Apollo version of Abel Gance's 1927 movie 'Napoleon,' in the buildings of the Cinematheque Francaise at the Fort-de-Saint-Cyr in Montigny-le-Bretonneux, May 6, 2021. (AFP / Stephane de Sakutin)

PARIS: In a mammoth restoration task for one of cinema’s most audacious and elusive treasures, a team of obsessives has spent 12 years recreating the original seven-hour cut of Abel Gance’s 1927 silent classic, “Napoleon.”

“It’s an act of madness,” admits Georges Mourier, head of the 2.5 million-euro (three-million-dollar) project. When they began in 2008, he and editor Laure Marchaut had only planned to spend a few months tidying up Gance’s archives in the basement of the Cinematheque Francaise in Paris.

In the process, they realised that previous restorations had mixed up two versions shown at the original premieres – a short one for the general public (some three hours long) and a longer version that Gance himself cut.

Piecing together the French director’s original vision has been a mixture of detective work, digital wizardry and extraordinary dedication. Despite initial excitement upon its release in 1927, the epic tale of Napoleon’s early years struggled to find an audience, in part due to its gargantuan length, but also because it came just as the advent of sound killed off interest in silent movies.

Repeated attempts to re-edit the film by distributors, film historians and Gance himself meant reels were scattered around the globe – some lost, some damaged, others mixed up or re-spliced, leaving up to 22 versions in existence.

His team often had to work shot by shot. To put together the original scene of Napoleon hearing La Marseillaise, for instance, Mourier and Marchaut had to combine images from a version found in Rome with others found in Copenhagen.

“We weren’t just sewing pieces together,” said Mourier, “, we were lacing them.”

His team has now worked through 100 kilometres of film, much of it on the verge of disintegrating and highly flammable.

Marchaut had to keep her gloves on at all times while working with the reels and still recalls the “strong stench of vinegar” when she opened one box in which a reel had gone mouldy.

Using a mix of chemical processes and the latest digitisation techniques, they have managed to restore missing frames and turn the whole film into a high-definition print that promises to maintain the “soul and feel” of the celluloid original.

The film itself has long had a near-mythic status among cinephiles and filmmakers, not least director Francis Ford Coppola, who owns many of the rights through his company, American Zoetrope, and presented one of the restored versions to widespread acclaim in 1981.

British film historian Kevin Brownlow dedicated 50 years of his life to finding and restoring different cuts of the film, and it is his version (a breezy five and a half hours) the British Film Institute released on DVD and Blu-Ray by in 2016.

The film’s reputation stems from its many technical innovations, including rapid editing, hand-held – and horse-mounted – camera shots, super-imposition and a famous final sequence featuring three split screens requiring three projectors in the cinema.

“Each sequence was a cinematic revolution,” said Mourier, describing it as the last “super-production” of the silent era.

There had been hopes of presenting this latest version in time for the bicentennial of Napoleon’s death on May 5, but the work has taken longer than expected. Mourier hopes to complete the project by the end of the year.

The job now is to find a setting worthy of such a massive spectacle.

Mourier dreams of pulling in thousands for a mass screening and staging it in the courtyard alongside Napoleon’s tomb at Les Invalides in Paris.

“One thing is certain,” he said. “The audience will never have any idea of how far we went with this.” – AFP