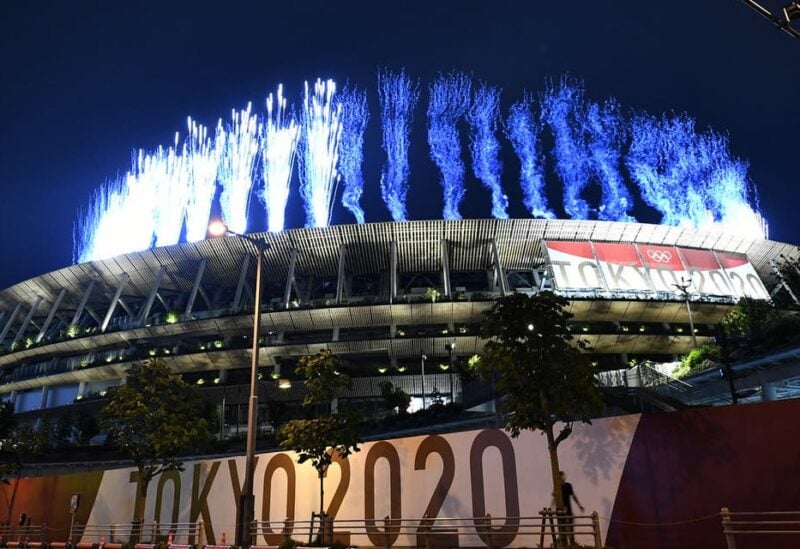 Fireworks light up the sky above the Olympic Stadium during the opening ceremony of the Tokyo 2020 Olympic Games, in Tokyo, on July 23, 2021.(File photo: AFP)

The sky over the National Stadium in Tokyo exploded in indigo and white as fireworks marked the start of the opening ceremony for the Olympics on Friday, celebrating the world’s best athletes set to compete amid the COVID-19 pandemic.

Postponed for a year, organizers were forced to take the unprecedented step of holding the Games without fans as the novel coronavirus is on the rise again, taking lives around the world.

Even the opening ceremony, normally a star-studded display teeming with celebrities was eerily silent, with fewer than 1,000 people in attendance, strict social distancing rules and signs calling on the spectators to “be quiet around the venue.”

Regardless, it marks a coming together of the world, with an audience of hundreds of millions around the globe and at various stages of the pandemic tuning in to watch the start of the greatest show in sport.

Indigo and white are the colors of Tokyo’s Olympic emblem.

The opening video featured at the stadium recapped Japan’s path to the Games and the challenges the world has faced since the selection of the Japanese capital as host in 2013.

It showed how in 2020 the coronavirus struck, with lockdowns forcing the unprecedented postponement only four months before the Games were supposed to open, setting off a roller-coaster period of uncertainty and preparations in isolation for the athletes.

Some of them are expected to use the ceremony to make statements about equality and justice and several nations will be represented by a man and a woman after the organizers changed their rules to allow two flagbearers.

Japan had billed the Olympics as an echo of the 1964 Tokyo Games, which marked the country’s return to the world stage after its devastating World War Two defeat, but this time showcasing its recovery from the 2011 earthquake, tsunami and nuclear crisis.

Shortly before the fireworks, the opening video turned into the live action shot of the stadium where a lone female athlete placed her hand on the ground over a single seed.

She then slowly stood up with her shadow stretching out in the shape of a seedling, underscoring the Games’ theme of rebirth after the pandemic as well as Japan’s reconstruction after the 2011 disasters.

With Tokyo’s streets mostly empty for the long weekend, a small number of the biggest enthusiasts braved scorching heat and heavy security to get a photo in front of Tokyo’s Olympic Stadium on Friday morning.