Grandparents in the pandemic: a lost year, but now some hope 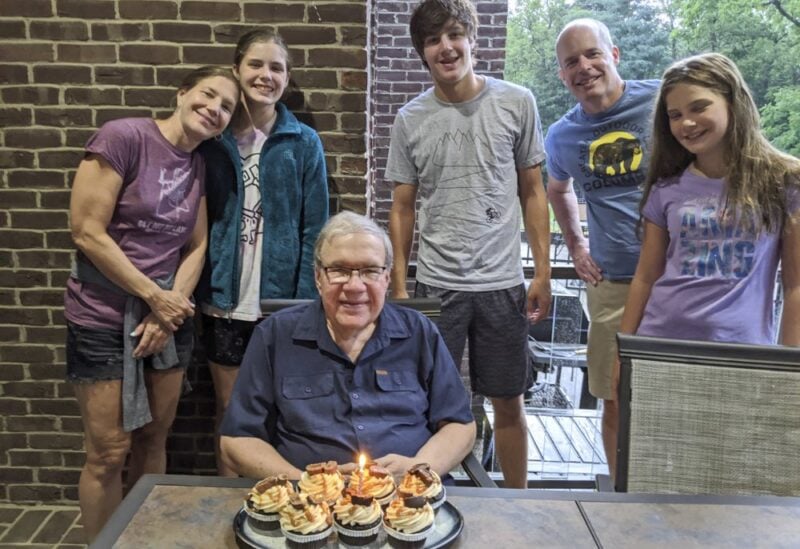 CINCINNATI: No sleepovers with popcorn and Disney movies. No dance recitals or holiday pageants, let alone any Grandparents’ Day for visiting the kids’ classrooms.

The first 12 months of the pandemic represent a lost year for many in the largest group of grandparents in U.S. history. Most of the nation’s some 70 million grandparents are in the fourth quarter of their lives, and the clock has kept running.

“Working with older adults, I’m seeing a lot of depression, a lot of increases in loneliness,” says Nick Nicholson, a nursing professor and researcher on aging at Quinnipiac University in Hamden, Connecticut. “It’s been really difficult … the anxiety, the despair, the social isolation. Over time, there are so many adverse effects. The sooner we expand the bubble, the better, so people can start healing together.”

The federal Centers for Disease Control and Prevention last week offered some beginning steps forward for Year 2, saying fully vaccinated grandparents could visit in a single household with healthy children and grandchildren without masks or other special precautions.

Doris Rolark blew air kisses to her mask-wearing grandchildren and great-grandchildren when they dropped off presents on her 78th birthday last month. She resumed hugs last week after the CDC guidelines were announced.

“It was great. I’m getting excited to see the rest of them,” says the Middletown, Ohio, woman, who has three grandchildren and 16 great-grandkids. “I hope it’s going to be better now.”

Joe and Nancy Peters had one of their 11 grandchildren over to visit last week as they began “cautiously returning to normal,” he says. Both retired educators in their 70s, they were used to being heavily involved with the grandchildren, all living near them in suburban Cincinnati, before the pandemic and its safety restrictions hit.

It was especially tough losing time with the youngest.

“They’re 3, 4, and 5 years old and a whole year has gone,” Nancy Peters says. “They’ve changed a lot … and Amelia would say each day to her Mom, ‘I am going to have a sleepover at Grandma’s when coronavirus is over.’

Both Peters and Rolark have been fully vaccinated as the shot pace has picked up nationally in recent weeks, with an estimated 60% of those 65 and older getting at least one dose so far. But the CDC reports that only 10% of the population as a whole has been fully vaccinated and reminds that vulnerability increases with age. The CDC says eight of 10 people who have died in the United States from the virus were 65 or older.

Nicholson says that while some older adults are “just breaking down the door to get out” after a year of isolation, others remain apprehensive with variant strains and other unknowns ahead.

Joaniko Kohchi, who heads the Institute for Parenting at Adelphi University in Garden City, New York, says grandparents and other family members need to be cautious as they try to return to something that passes for normalcy.

“There’s going to be unquestionably a period of adjustment that will continue; planning and flexibility is really important,” she says.

Also unknown: how much some older adults have been hurt not only emotionally but mentally by losing in-person contacts and other activity outside their homes for a year.

“I think seeing the same two to three people all time, it can be really tough,” says Arman Ramnath, whose India-born grandmother Vijaya Ramnath, 94, has lived with his parents in Columbus, Ohio, since before he was born. “It kind of ages you faster.”

While many grandparents are keeping in touch by phone, text and video chats, others lack access or ability to use such technology. A study conducted last September and October found resilience among older Americans, but also signs of trouble, with many reporting decreased happiness and some reporting increased loneliness and depression heading into winter.

During good weather, the Peterses had gone on and received a lot of driveway visits, including a driveway one-person dance recital for them by a granddaughter. They went to dozens of outdoor events such as baseball and soccer games last year, but couldn’t attend the grandkids’ indoor basketball games.

“It’s been pretty tough,” says Joe Peters, who recounts gym-hopping Saturdays in previous years when they hit as many as eight kids’ basketball games in a day.

Many grandparents actively help out their children by baby-sitting and school or daycare pickups, so pandemic barriers against that have made for “a lose-lose” situation for families, Nicholson says.

Rolark, of Middletown, Ohio, has always been active with the offspring. She raised three children as a divorced single woman, and two of her great-grandchildren lived with her through high school. Her progeny have been paying her back during the pandemic for all those years of her support when she was also working a full-time office job at a steelmaking company.

“I couldn’t have made it without them,” says Rolark, who says great-grandson Amarius Gates kept her driveway shoveled during the winter, while granddaughter Davonne Calhoun and others in her large family have run errands and helped her with house chores.

Nursing homes and other assisted-care facilities, too, have faced challenges to keep grandparents connected as many cut off contact visits because of concerns about virus spread. “It’s been lonely,” says Deb McGlinch, a patient in Versailles Rehabilitation & Health Center in western Ohio.

She was used to frequent visits from her granddaughter, Kortaney Cattell, 20, to play card games such as Uno with her. She has been able to do video chats with Kortaney and seven other grandchildren, but has missed their card games. They recently resumed friendly competition at a distance with a virtual slot machine game.

McGlinch says that instead of just trading small talk by phone, now “we can have fun.”

One in 10 U.S. grandparents now live in the same household with at least one grandchild. In some Asian cultures, that has long been common. In Ramnath’s family, his India-born maternal grandmother, Saroja Seetharaman, rotates among her three children and their six grandchildren, in Dallas, Atlanta and his Columbus home.

Ramanth, 27, has been nervous about getting near his older grandmother, Vijaya, especially whenever he has just returned from Washington, where he is a Georgetown University Law School student. He is studying remotely but sometimes must visit school such as to pick up books.

Ramanth would have liked to have spent time with her in the past year learning more about the family’s history. She once met Mohandas K. Gandhi, India’s late famed leader and proponent of nonviolence. She attended a tea hosted by Queen Elizabeth II. And he’s seen photos of her late husband, a high-ranking Indian Navy officer, with the late Indian Prime Minister Indira Gandhi.

“This is a time when I wish I could talk to her more about her life, as she’s getting older,” says Ramanth, who hopes to have more contact soon now that she’s been fully vaccinated. “At times it can be kind of sad. You don’t get to spend as much time with someone even if they’re living with you.”