In a time of pandemic, love is in the air on Canada-U.S. border 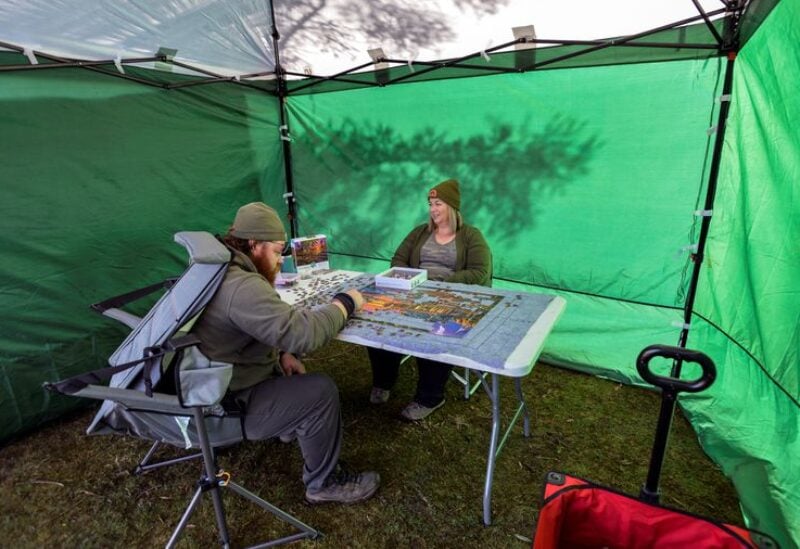 Christina Kelly did not picture marrying her American sweetheart in the Peace Arch Park – a 42-acre (17-hectare) stretch of manicured lawns and neatly trimmed garden beds at an otherwise unremarkable border crossing in the Pacific Northwest.

Kelly, a 28-year-old Canadian legal assistant from Vancouver, had been crossing back and forth between British Columbia and Washington state to see her boyfriend without a hitch for two years.

The start of the coronavirus pandemic, and the closure of the Canada-U.S. border in March 2020, forced a change of plans.

Where many couples have reluctantly put off weddings, Kelly and her now-husband, who is in the U.S. Navy, decided to proceed anyway and tied the knot two months ago in the one place where they have been able to see each other during the past year.

“We would have gotten married at some point,” she said. “But (COVID-19) had to speed things up.”

It “wasn’t my ideal wedding,” Kelly said, recalling how she shivered in her white wedding dress in the cold and muddy park, as her mother, the groom’s mother and some of the couple’s friends from both sides of the border looked on.

But she now realizes that it was, in some ways, the perfect setting. “The park has been my life for the past year, (the only place) where I can see my husband. For us to be able to get married there, it was very memorable.”

In pre-pandemic times the Peace Arch Park was little more than a pit stop for travelers and commercial traffic as well as a picturesque picnic spot where families from nearby border towns gathered.

With the closure of the border last year, a move that initially barred all but essential workers from crossing, the park has become a lifeline for couples in cross-border relationships.

British Columbia closed its side of the park in June, but the American side remains open. Canadians are able to enter Washington state by parking in a residential area and walking about half a mile (800 meters) before crossing a shallow ditch dividing the two sides.

It was not immediately clear why Canadian residents are still permitted to come back into the country via the U.S. side of the park without having to comply with Canada’s border measures, including mandatory negative COVID-19 tests and a 14-day quarantine.

Public Safety Canada, the ministry responsible for border security, referred Reuters to the Royal Canadian Mounted Police, who said visitors to the park “should expect to adhere” to mandatory quarantine orders, and that their Federal Border Integrity Program had “increased enforcement of the area.”

But it remains possible to exit the park from the U.S. side without encountering an official port of entry, at which Canadian border officials would enforce the requirements.

As a result, the park has become the staging ground for the kind of milestone events that are hard if not impossible to arrange as the two nations try to curb the spread of COVID-19 – dates, birthday parties, family gatherings and, of course, weddings.

Peace Arch Park saw its visitor numbers more than double to almost 140,000 in 2020, according to the Washington State Park Service (WSPS), which manages the American side of the park. Visitors began streaming in from the very beginning of the border closure, said Amber Forest, area manager for the WSPS.

The weddings soon followed. Roughly seven were held in the park in 2019, according to the WSPS. That number soared in 2020, with five weddings held every weekday and two dozen every weekend for much of the year.

Access to the park is constantly under threat. Some Canadian politicians have recently renewed calls for their U.S. counterparts to shut off access from the American side, but Washington state has not acted so far.

Regan Steele, 41, has her trip to Peace Arch Park from her home in Marysville, located about 80 miles (130 km) south of the border, down to a science: she packs a tent, portable heater, coffee for her and hot chocolate for her Canadian boyfriend of six years, Rod Greenwood.

Every weekend they set up camp and do a puzzle together while listening to music and talking.

The park has been “a relationship-saver,” Steele said, even if it’s hard not to think “over this last year that we’ve just missed so much time together.”

But she tries not to dwell on any regrets.

As for Kelly and her husband, they are continuing to meet in the park as a married couple every weekend until he moves to Canada, going for walks past the copse where they were married.

Once the border reopens, Kelly doesn’t think they’ll return for a while.

“I’ve had enough of the park for now,” she said. “It’d be nice to just be with my husband.”