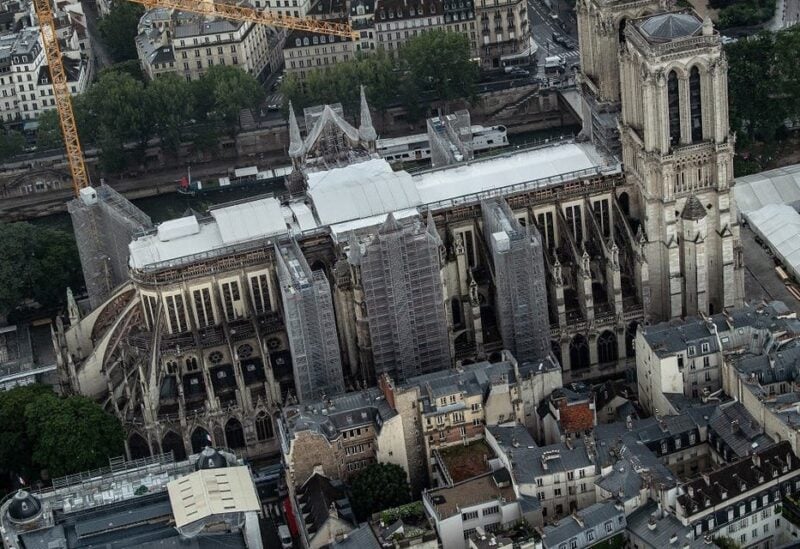 An aerial picture taken on July 12, 2021 shows a view of the Notre-Dame de Paris Cathedral on the “Ile de la Cite” island in the Seine river in Paris. (Bertrand Guay/AFP)

Donors have contributed over 840 million euros ($985 million) to the rebuilding of Notre-Dame cathedral in Paris, which was badly damaged by fire in April 2019, the official in charge of the reconstruction said Wednesday.

Jean-Louis Georgelin, the former armed forces chief overseeing the project, told a Senate commission that money was continuing to pour in for the restoration of the 13th-century Gothic masterpiece.

He said that the “outpouring of generosity” included 100 million euros from French oil giant Total and a large undisclosed sum from the foundation of the late L’Oreal heiress Liliane Bettencourt.

He did not reveal how the money would be spent, saying the breakdown would be made public once all the tenders for the work had been awarded.

The spire of the iconic landmark collapsed and much of the roof was destroyed in the blaze on April 15, 2019.

But the efforts of firefighters ensured that the cathedral survived the night, with its famous towers and flying buttresses intact.

The last two years have been spent on safeguarding the structure, a task that has now been completed, including removing 40,000 pieces of metal scaffolding that were damaged in the blaze.

Georgelin confirmed that the cathedral was on course to reopen in April 2024, despite delays caused by the COVID-19 pandemic and the release of lead particles from the roof during the inferno.

But renovating the surroundings of the cathedral, a task that falls to Paris city hall, would “probably” begin only in 2025, he said, adding that a temporary entrance would be created for tourists visiting during the 2024 Olympics in the French capital.