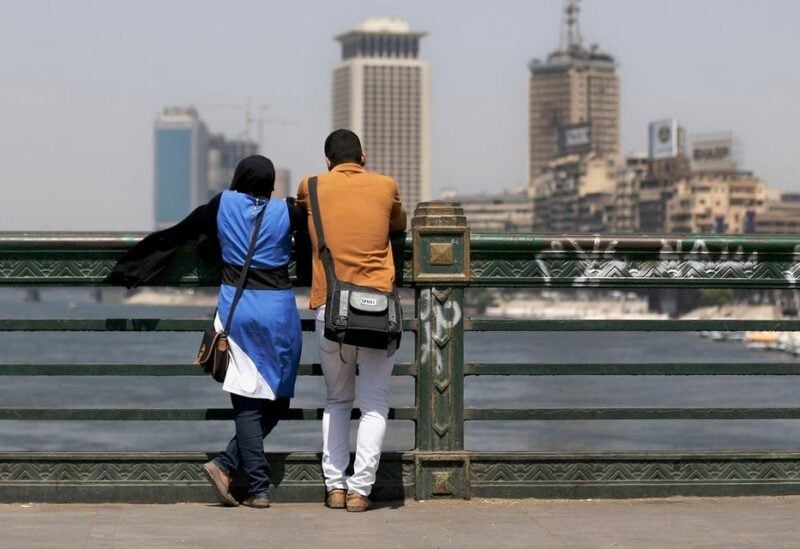 A couple of Egyptians share a moment as they overlook the Nile river from a bridge in Cairo, Egypt, Monday, Sept. 9, 2013. (File photo: AP)

Recently there has been some commotion in Egypt and across the Arab world about what has been called part-time marriage. The term is applied when spouses agree on certain conditions to guide their relationship, including spending a limited time with each other. They are not obligated to stay in the same house or interact at all if they don’t want to.

The family lawyer behind the initiative insists on the legality of this marriage and its congruence with Islamic law.

His claims were supported by Sheikh Ahmed Kereima, an Azhari Scholar, who insisted that he can’t forbid it if the woman agrees to the conditions of this marriage.

Conversely, Dar al-Iftaa has issued a stern statement claiming that this marriage is void and forbidden according to Islam. Further adding that it is an insulting attack on women, and on family values central to Egyptian identity and society.

The reality is that this so-called part-time marriage has always existed in Egypt and is a direct concomitant of the capitalist boom of the Sadat era and the discovery of oil in the Gulf States.

During the early to late eighties the Gulf States started requesting large numbers of white-collar workers from Egypt who were employed in various governmental and nongovernmental sectors. Egyptians who were unable to directly benefit from the new capitalism ushered in by Sadat and continued by Mubarak were yearning to taste the sweet luxuries of life that they were deprived of.

Accordingly, huge numbers of Egyptian families packed their bags and ventured to the Gulf. These were the ones who originally belonged to the middleclass and were privileged enough to take their families with them.

Others from lower socioeconomic backgrounds were unable to take their families, with only the head of the household making that trip leaving his wife to care for the children back home. This man would come back on vacation only once a year, if possible, but would periodically send payments and gifts to make up for his continuous absence.

Even the middle-class families who were able to resettle in their adoptive homes were compelled to separate when the children reached college age. The mother would typically join them, and the father would stay behind to support the lifestyle that they had become accustomed to, or to finance the new house being built, or the summer home that his children have been nagging him to get.

The result saw the father united with his family maybe once or twice a year. They would normally treat him as an unwanted guest who they begrudgingly put up with to fund their never-ending whims and wants. There have been several Egyptian films, television series and works of fiction depicting these scenarios with mild variations.

My personal favorite is the novel Zaat by Sonallah Ibrahim.

I remember when I was a young girl and my father was offered the opportunity to travel to the Gulf and leave us behind, he replied with an emphatic “No” refusing to leave us behind. I remember his words as if they were yesterday: “I don’t want my children to be raised as orphans when I’m still alive.”

Yet, his foresight was disregarded by many relatives who thought this was their opportunity to insure their children’s future. I saw firsthand the number of broken families that suffered under the burden of an absent father and an overwhelmed mother.

For some reason marriage has been attacked by various groups camouflaged as progressive metamorphosis of an archaic and redundant institution. Whether it’s part-time marriage in Egypt or platonic marriages in the West, the changes proposed that we are supposed to cheer for are old abominations veiled as improvements.