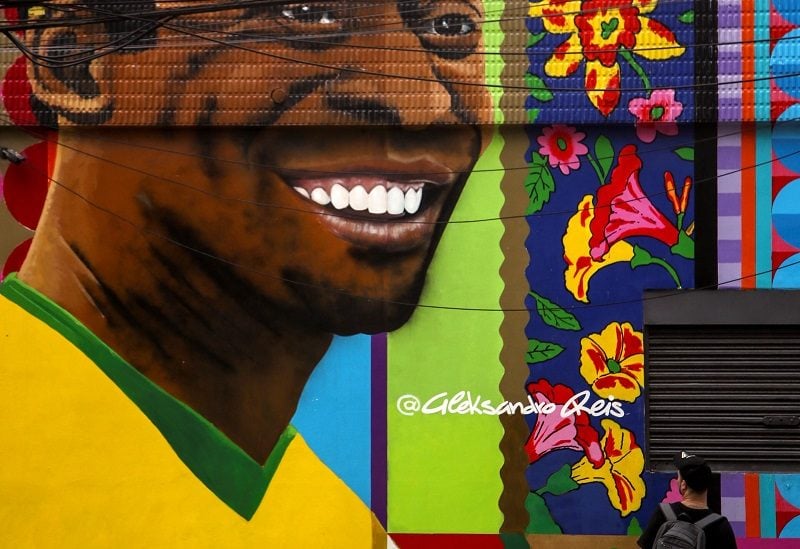 He was born with the ball at his feet. Every movement, every pass, every goal was special. He impressed fans with his agility, technique and love for the game.

In FIFA’s 1904-1984 anniversary book, Pele was hailed as the person who made football an art form. World football’s governing body also named the Brazilian striker the World Footballer of the Century, while the International Olympic Committee named him as its sportsperson of the last century. Pele was the king of football — a man small in stature but for whom no superlative is too big.

Edson Arantes do Nascimento was born on October 23, 1940, in Tres Coracoes, Brazil, and was named after the American inventor Thomas Alva Edison. His nickname though, would forever remain a mystery even to the man himself. The most common theory is that as a kid he was a fan of the goalkeeper in his father’s team named “Bile,” but mispronounced it as “Pile.” Despite his frustration at the name, it stuck and developed into Pele.
In 1956, Pele earned a contract with Brazilian side Santos and scored against St. Andre in his league debut at the age of 15. It wasn’t long before he was called up to the Brazilian national team. At just 16 years and 257 days old, he made his international debut in a 2-1 defeat to Argentina, scoring Brazil’s only goal of the game.

A year later at the World Cup in Sweden, he was in the squad, although he had to be content with being on the bench at the start. But then the little magician scored six goals in four games, helping his country to the title. In the final against the hosts, Pele put on a brilliant display of football artistry and tricks. An international star was born.

In his hometown, Pele was adored like no other footballer right from the start of his career. Brazil’s government went as far as declaring him a national treasure at the age of just 20 to prevent him from taking a transfer abroad. When Pele did venture beyond Brazil’s borders, he was welcomed like a head of state. At the 1962 World Cup in Chile though, the striker suffered a setback. Brazil defended their title, but footballer’s newest hero hardly played a part, getting injured in the second group-stage game.

As if to make good on a disappointing campaign, Pele led Brazil to their third title in 1970 in Mexico. A year later, the super striker made his 92nd international appearance in front of 180,000 fans in Rio de Janeiro’s iconic Maracana stadium. It was Pele’s final appearance for the Selecao. Many considered his international retirement premature, considering Pele was only 30 at the time, but with 77 goals to his name and a unique style, no one could doubt his commitment.
Even today, the reasons behind Pele’s retirement remain unclear. Did it come as the result of a dispute involving the then-president of the Brazilian governing body, Joao Havelange? Pele was later to cite political reasons, stating that he didn’t want to support his country’s military junta. Whether he really was opposed to the dictatorship or had good connections with ministers remains a question about Pele’s life.

The striker continued his playing career in the Brazilian league. Precisely how many games and goals he managed for Santos is unclear. Officially, though, his record is 1,088 goals in 1,114 games. What also remains unclear is when he scored his 1,000th goal. He was supposed to have scored it with a penalty in a game against Vasco da Gama and the whole of Brazil celebrated this achievement on November 19, 1969. Even the church bells rang. But later research suggested that this goal was in fact his 1,002nd.
Pele called time on his playing career in 1974 — at least temporarily. A year later, though, he signed a contract with New York Cosmos in the then little-known North American Soccer League. The reason? A friend had embezzled all of his assets and he needed the cash. In New York, Pele earned millions of dollars a year, the highest contractual amount at the time. But in addition to the financial incentives, Pele also became a pioneer for soccer in the United States. Along with West Germany’s 1974 World Cup-winning captain Franz Beckenbauer, Pele helped popularize the sport in the States. In 1977, after he had led the Cosmos to a Soccer Bowl title, Pele hung up his boots for good.

Even today, Pele is widely considered the most complete attacking player in football history, alongside Argentina’s late Diego Maradona, and newly-crowned World Cup winner Lionel Messi. The Brazilian number 10 had two good feet and was also good in the air. Above all else he was known for his intuitive nature in sizing up opponents’ movements. Recognizing this allowed him to play the right pass or shoot at exactly the right time.
Following his playing career, Pele went on to hold a number of posts, including as a UNESCO Goodwill ambassador and Brazil’s extraordinary minister for sport, a post he used to try to battle corruption in football in the country. He also had a television company, published autobiographies, starred in films and received a whole host of awards from the world’s biggest sporting and media outlets.

“Every child in the world wants to play football like Pele — that’s why I take on the responsibility to show how to not only be a good footballer, but also a good man,” he once said.

In recent years, Pele suffered a number of health challenges, undergoing a hip operation in 2012, suffering a urinary tract infection, surgery to remove kidney stones and fighting a battle with cancer. In an interview with Brazilian broadcaster TV Globo in February 2020, Pele’s son, Edinho said his rather had become “depressed” and “embarrassed” by his deteriorating health, leaving him “reclusive.”

As for his personal life, Pele was married three times and had several affairs, fathering several children both in and out of wedlock. But the world will always remember Pele as the king of football.