Pharaoh with a beard and colored eyes .. “The King” raises controversy 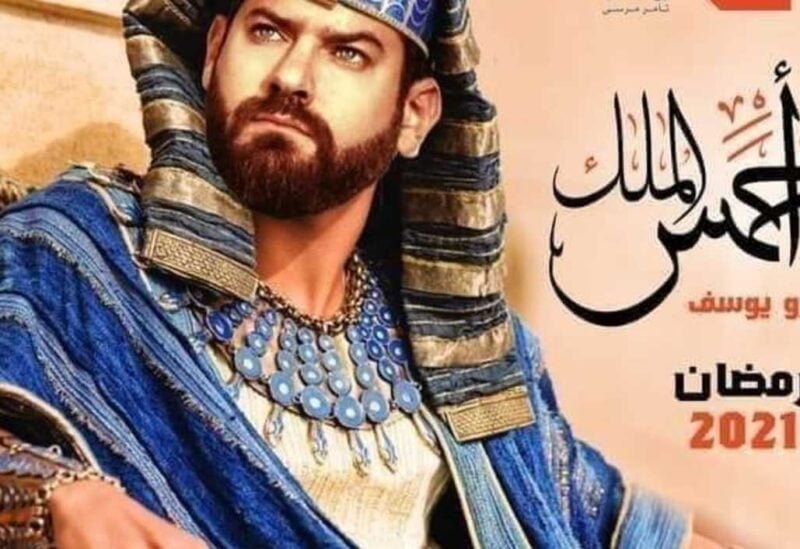 The presentation of the promotional video for the series “The King”, which deals with the life of the Pharaonic King “Ahmose”, sparked a great controversy on social media, due to the fashion and shape of the heroes, which sparked criticism that it lacked historical accuracy.

The series, which will be shown next Ramadan, is based on the novel “Good Struggle” by Naguib Mahfouz, and the success story of the Egyptian King Ahmose in expelling the Hyksos invaders from Egypt.

Bloggers also criticized Amr Youssef’s portrayal of the “Ahmose” character because of his shape and the color of his eyes, and said that Ahmose was a young southern brown man with black eyes.

Reem Mostafa, participating in the series, who embodies the character “Merit”, the Queen of the Hyksos, who appeared in a black cloak and yellow hair in the promo, responded that it had nothing to do with the appearance of the Egyptian princesses during the reign of King Ahmose, and that it did not embody the personality of an Egyptian princess.

A way from the controversy about the artists ’clothes and their appearance, Bassam Al Shamaa, historian and writer of Egyptology, expressed his rejection of this series from the ground up, and demanded that it be stopped due to historical errors in the novel written by Adib Noble.

Al-Shamaa said in statements to the Al-Hurra channel: “This novel is a disgrace to our history, and it raises urban confusion,” noting that the novel includes an imagined love story between King Ahmose and the daughter of the Malik Hyksos. “Even for the sake of drama,” says Al-Shamaa, “publishing such a story seems as if we are describing Hamas as a traitor.”

Al-Shamaa explained that Ahmose is one of the greatest military leaders in the history of Egypt, as he took over the rule of the country at the age of 10 years, and succeeded in removing the Hyksos from Egypt, and died at the age of 35.

Al-Shamaa emphasized that despite the difficulty of judging the series from a promotional video, it did contain many historical errors. He noted that the work was influenced by the films of Trojan and 300 Spartans, which showed macho leaders.

He explained that Ahmose was not muscular and did not have a beard, as the hero of the series Omar Youssef appeared, and he had abundant hair of dark brown and light mustache, and his length reached 1,635 meters. He also stressed that women wearing black gowns was not commonplace among the Pharaohs or the Hyksos.

For his part, Ahmed Al-Senussi, who supervised the historical side of the series, said, “Criticism is an important part of any work of art because criticism is already part of the history of art, but criticism is constructive if the critic specializes in this dramatic work.” He pointed out that “if the criticism is talking about matters such as beard or clothing, then this is not criticism, but rather just self-proof and writing on Facebook, no more or less,” he said.

Al-Senussi added in a post on his Facebook website: “Where, for example, are any stories in the era of Ahmose that tell us about the types of clothes. This era was in the era of the third Egyptian decay, and the beginning of the era of glory and the founding of the 18th family.” He continued: “Beards were only forbidden to priests, then why did they make two types of beards for the king, one of which was the coronation beard and the second was the death beard (the Osirian beard)?

He stressed that the dramatic work cannot be replicated by history, indicating that the goal of the King’s series is to highlight a figure that society has forgotten, which is the character of the warrior leader Ahmose bin Sqnnera, and to establish a pure Egyptian army at a time when Egypt does not have an organized army, so that the generations know the Egyptian military championships.