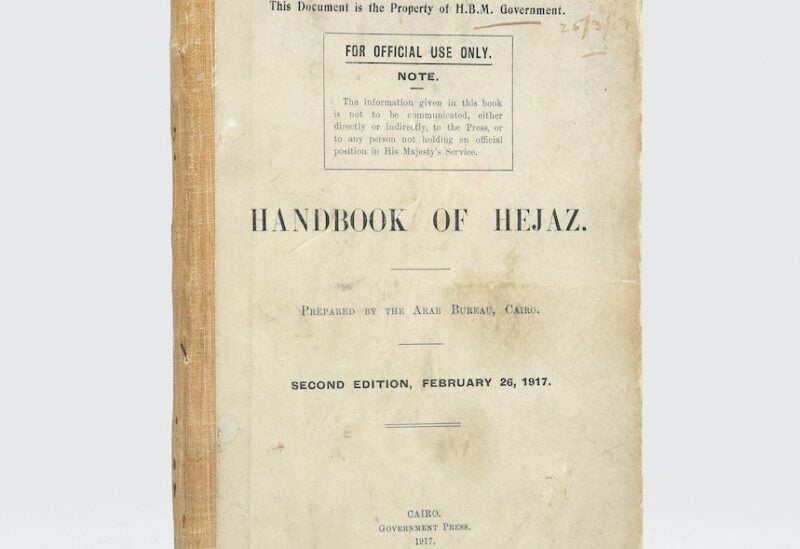 This “apparently unique” bespoke album contains 120 original photographs of Jeddah’s well-known Bayt Nassif, taken before its restoration in the early 1980s. The Saudi government purchased this historic landmark in 1975 and initially used as a library, but it is now a cultural center that hosts exhibitions and other events. King Faisal’s decision to rehabilitate the building “provided an enlightening and inspiring model for sustainability in historic areas,” according to a book cited in the Peter Harrington catalogue.

Located on the main street of Jeddah’s historic Al-Balad district, the house was built for the then-governor of Jeddah, Sheikh Umar Effendi Al-Nassif between 1872 and 1881 and is now, the catalogue states, “widely recognized as one of the most important surviving examples of Red Sea coralline limestone architecture.” The house was later used by King Abdulaziz bin Saud as his primary residence in the city until Khuzam Palace was constructed.

Until the 1920s, Bayt Nassif was also the site of the only tree in Jeddah’s old city — so the building is also known locally as The House of the Tree. That neem tree still survives and can be seen in images in this book.In 1819, Sir Miles Nightingall, commander-in-chief of Britain’s Bombay Army, was returning to England from India when their ship “Teignmouth” was grounded on a sandbank in the Gulf of Aden. Having got their boat moving again, Nightingall and his entourage — including Captain James Hanson, the author of this work — headed to Jeddah “where they were welcomed by the Turkish governor, newly installed following the restoration of Ottoman rule in Egypt. Having taken advice from Henry Salt, consul-general in Egypt, they decided on an overland route across the desert that would take in the ‘most interesting and marvelous ruins’ at Thebes.” Hanson’s book describes — and maps — their journey from Kosseir (now Quseer) on the Red Sea westwards inland to Kennah (Qena) on the Nile, just east of Dendera “passing ruined forts, ‘Hills having the appearance of Tombs’ and ‘Sterile Desert – not a blade of Vegetation.’”

This three-volume manuscript relate to Midshipman Francis Wyatt Rawson Larken’s service in the British Royal Navy in the early-to-mid 20th century, for part of which Larken was stationed in the Arabian Gulf around what the British then called the Trucial States, which later became the UAE. The books were unpublished at the time, and according to the catalogue, include “a compelling account of a visit to Dubai and an on-board reception for the Trucial Sheikhs.”  Those visitors would have included Sheikh Saeed bin Maktoum Al-Maktoum of Dubai, Sheikh Shakhbut bin Sultan Al-Nahyan of Abu Dhabi, and Sheikh Sultan bin Saqr Al-Qasimi of Sharjah, among others.

“There were some 8 or 10 of the higher cast (sic.) on board and these were taken round the ship by the Admiral and the Captain while their followers stayed on the Quarter Deck. … They all then congregated on the Quarter Deck where the band played. They then left in their respective barges — ornate and rather splendid motor dhows, the various Sheikhs receiving salutes — the number of guns ranging from 6 to 1 in ratio to their importance. They brought us gifts of Beef and Melon Jelly … and were sent away with Gold Flake Cigarettes and chocolate,” Larken writes. “Every man carries his broad curved belt knife — heavily set with worked silver — and the chief ones wore splendid ‘Bournous’ of gold work cloth. All were fine upstanding men very much like the Sheik of fiction.”