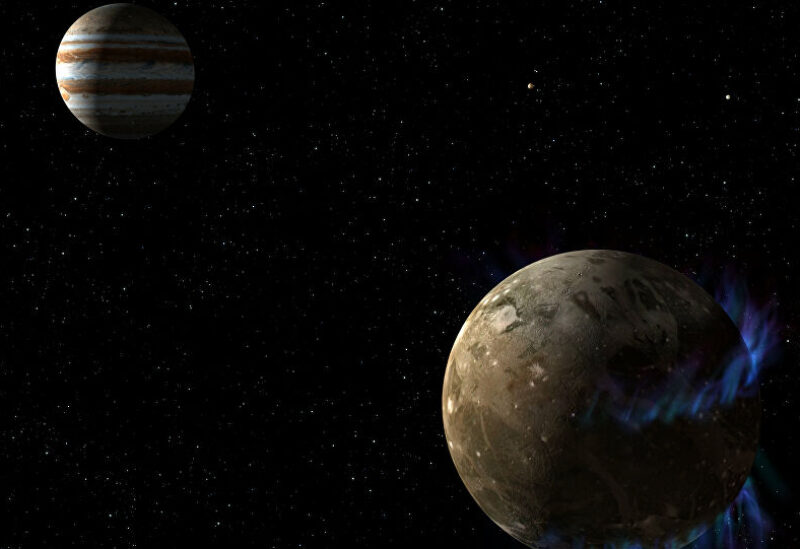 According to the astronomers, this revelation could give insight into similar water-filled atmospheres of other icy bodies in the solar system.

Astronomers have detected evidence of water vapor in the thin atmosphere of Jupiter’s largest moon Ganymede for the first time. Earlier, research suggested that Ganymede, which is the largest satellite in our solar system, may contain more water than all of Earth’s oceans combined. However, the Jovian moon is extremely cold and the water on its surface is frozen.

Although there was previous speculation about the possibility of ice on Ganymede’s surface morphing directly into gas, there was no evidence – until now. This new revelation comes after researchers analyzed old and new data from Ganymede compiled by NASA’s Hubble Space Telescope.

In 1998, Hubble captured the first ultraviolet images of Ganymede, which includes glimpses of its auroras, providing evidence that Ganymede has a weak magnetic field. Moreover, ultraviolet signals detected in these auroral bands suggested the presence of oxygen molecules that are produced when charged particles erode the moon’s icy surface.

During NASA’s Juno mission to Jupiter, researchers tried to measure the amount of atomic oxygen in the Jovian moon’s atmosphere using Hubble. Surprisingly, they found very little atomic oxygen, suggesting that there must be another explanation for the earlier ultraviolet signals. The scientists then focused on how the surface temperature of Ganymede varies drastically throughout the day.

After several observations, the team concluded that at the hottest spots on the moon’s surface there’s the possibility that ice may become sufficiently warm enough to convert directly into vapor. They also noted that differences were recorded between a number of ultraviolet images from Ganymede and shockingly, they matched places where one would expect water in the moon’s atmosphere based on its climate.

“Water vapor in the atmosphere matches the data very well. The main reason previous research failed to detect water in Ganymede’s atmosphere is because the ultraviolet signal from molecular oxygen is very strong. Within this stronger oxygen signal, it’s hard to find other signals,” said Lorenz Roth, a planetary scientist at the KTH Royal Institute of Technology in Stockholm who led the observation.

Roth also stated that the findings suggest that water vapor may exist in the atmospheres of icy bodies in the outer solar system.