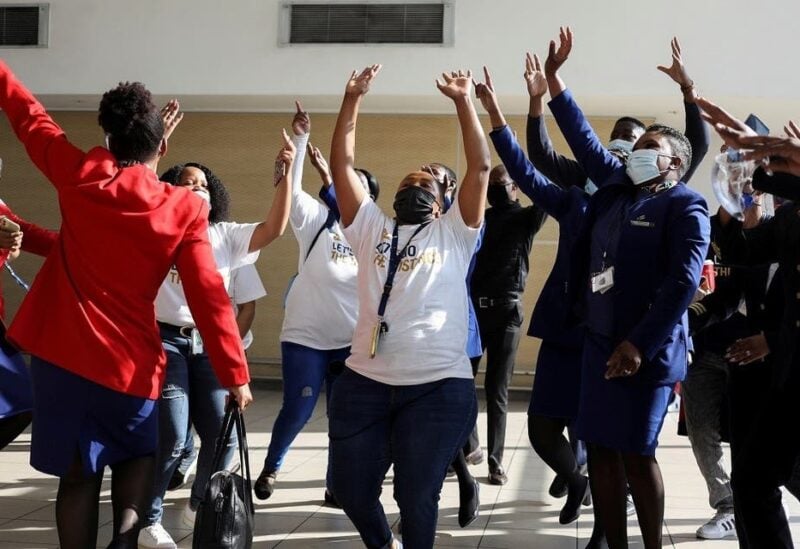 Workers sing and dance as a South African Airways (SAA) airplane prepares to take off after a year-long hiatus triggered by the national airline running out of funds, at O.R. Tambo International Airport in Johannesburg, South Africa, on September 23, 2021. (Reuters)

Jubilant South African Airways (SAA) staff at the country’s biggest airport broke into song and dance on Thursday as the airline took to the skies for the first time in around a year.

State-owned SAA’s longstanding financial woes were exacerbated by the COVID-19 pandemic and it halted all operations last September when it ran out of funds.

The company exited administration in April thanks to another massive government bailout.

It restarted domestic flights from Johannesburg to Cape Town on Thursday and next week will launch a slimmed-down international service to five African capitals: Accra, Kinshasa, Harare, Lusaka, and Maputo.

“After so many months we’ve been waiting for this moment, I am so excited. I am over the moon,” Mapula Ramatswi, an SAA flight attendant told Reuters at Johannesburg’s OR Tambo International Airport.

“I’m actually emotional the fact that it’s happening today, we never thought it would happen.”

Ramatswi said the many months when SAA was grounded were difficult financially, but her family had helped her pull through.

Her colleagues sang church songs, ululated, clapped, and danced nearby as an SAA plane with its tail fin bearing the colors of the South African flag took off.

The government has said it will sell a majority stake in SAA to a local consortium, and a due diligence process has been mostly completed. But the share purchase agreement has not yet been signed.

The planned sale of a 51 percent stake in SAA is part of government efforts to halt repeated bailouts to ailing state firms like SAA and power utility Eskom that have placed massive strain on stretched public finances.