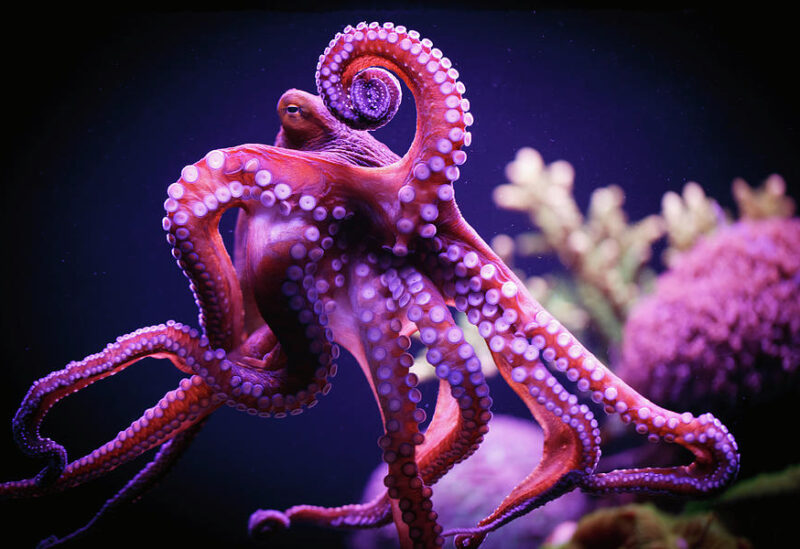 A study published by researchers in Brazil showed that octopuses have two main patterns of alternating sleep, similar to those in humans.

The researchers said these findings provide new evidence that octopuses possess a complex and sophisticated nervous system that forms the basis for a repertoire of equally sophisticated behaviors, while also providing a broader view of sleep development, an important vital function.

The octopus has 8 limbs and 3 hearts, its blood color is blue, and it spews out “ink” to defend itself, and its ability to camouflage is great, and it dies after mating.

In the new study, researchers put a type of it known as “insularis” under observation in a laboratory. And they found that this color change is related to two distinct sleep states, “quiet sleep” and “active sleep,” according to “Reuters”.

During “a quiet sleep” the octopus remains still, its skin is pale in color and its eyes are almost closed. During “active sleep,” he changes the color and texture of his skin and moves his eyes while his body contracts and muscle spasms occur.

And the researchers noted that this was repeated during sleep. “Quiet sleep” usually lasts about seven minutes, compared to less than a minute for “active sleep.”

The researchers said that this cycle appears to be similar to “rapid eye movement” and “slow eye movement”, which are two patterns of sleep in humans as well as other mammals, birds and reptiles.

Lucid dreams occur during REM sleep, as breathing becomes irregular, heart rate increases, and muscles paralyzed. As for slow eye movement sleep, it is characterized by being deeper and less dreamy.

Head of the research team Sylvia Medros says the results indicate that the octopus may be dreaming or experiencing something similar.

She added, “The duration of active sleep in the octopus is very short, usually from a few seconds to one minute.