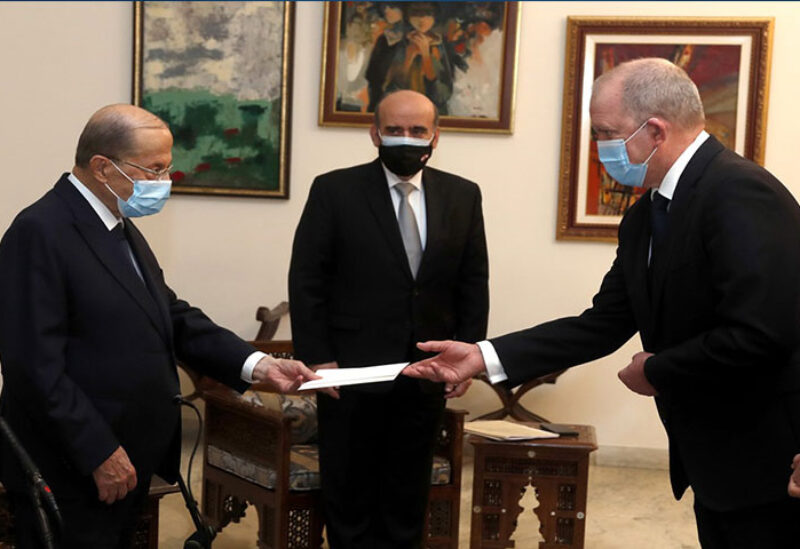 As the Ambassadors arrived, the approved ceremonies were held where the Army’s music played the anthem of each Ambassador’s country, while the flags of each country were also raised at the mast of the Presidential Palace, alongside the Lebanese flag.

Then, each Ambassador greeted the flag, before a company from the Republican Guard Brigade displayed, then the Ambassadors entered the October 22 Salon from there to the Salon of Ambassadors, where the credentials and members of the diplomatic mission were presented to President Aoun.

Upon the Ambassadors’ departure, the Lebanese Army Music played the Lebanese National Anthem. The Ambassadors conveyed to the President the greetings and condolences from their President’s for the victims of the Beirut Port explosion, and wished him success in his national responsibilities, assuring the President of their work to strengthen bilateral relations between Lebanon and their countries.

For his part, the President conveyed his greetings the Ambassadors’ heads of state, wishing them success in their new diplomatic missions.

The following is a summary of the biographies of the Ambassadors who submitted their credentials today:

-Held several administrative positions, especially in his country’s mission to the European Union.

-Worked as a consultant at his country’s embassy in Beirut between 2009-2013.

-Headed the Cooperation and Development Department of his country’s embassy in Uganda.

-Worked as assistant director at the Trade Policy Directorate of his country’s Ministry of Foreign Affairs.

-Graduate of the National Institute of Administration in Strasbourg and the European Institute of Higher International Studies in France.

-Holds a BA in Literature from the University of Prague.

-Assumed many administrative positions and worked in journalism before entering the diplomatic corps.

-Appointed second secretary at his country’s embassy in Brussels.

-Appointed as a first secretary at his country’s embassy in France.

-Appointed an advisor assigned to a mission, alongside the political director in his country’s foreign ministry.

-Appointed as his country’s ambassador to the Democratic Republic of the Congo and then to Kosovo, and extraordinary ambassador for his country to Tunisia.

-Headed the Morocco unit of his country’s Ministry of Foreign Affairs between 2018-2020.

Ambassador of the Kingdom of Norway, Martin YTTERVIK:

-Holds a BA in Arts from the University of Oslo, and specializes in the study of comparative religions.

-Fluent in English, French, and Arabic.

-Worked as a consultant for his country’s embassy in Amman and held the same position in Beirut as well.

-Appointed Chargé affairs to his country’s embassy in Tripoli.

-Appointed as a senior advisor in the Middle East and North Africa division of his country’s foreign ministry.

Ambassador of the Republic of Romania, RADU CATALIN MARDARE:

-Holds a degree from the Faculty of Electrical Engineering of the University of Bucharest.

-Followed several courses in various specializations, in addition to following a specialized program in international relations from the Romanian Institute for Diplomatic Studies.

-Holds a degree in Spanish from the Cervantes Institute in Bucharest.

-Assumed several administrative positions, where he was Vice President of the Red Cross in Romania.

Ambassador of the Republic of Chile, CARLOS MORÁN LEÓN:

-Holds a BA in Historical Sciences and Geography from the Catholic University of Val Paraiso, Chile.

-Pursued his studies in diplomatic sciences in the Academy of Diplomatic Sciences in Chile.

-Appointed Director of cultural affairs in his country’s foreign ministry, and Director of the North America, Central American and Caribbean countries division.

-While he was in Barcelona, he helped coordinate the establishment of the Joint Chamber of Commerce between Chile and Catalonia.

Ambassador of the Republic of Turkey, ALI BARIŞ ULUSOY:

-Assumed several administrative positions, as he was appointed deputy director general in his country’s Ministry of Foreign Affairs for Syria and Lebanon Affairs, and then head of the Syria and Lebanon Department in the same ministry.

-Appointed consul general for his country in Brussels and head of the Middle East section in his country’s foreign ministry.

-Appointed advisor to his country’s permanent mission to the European Council.