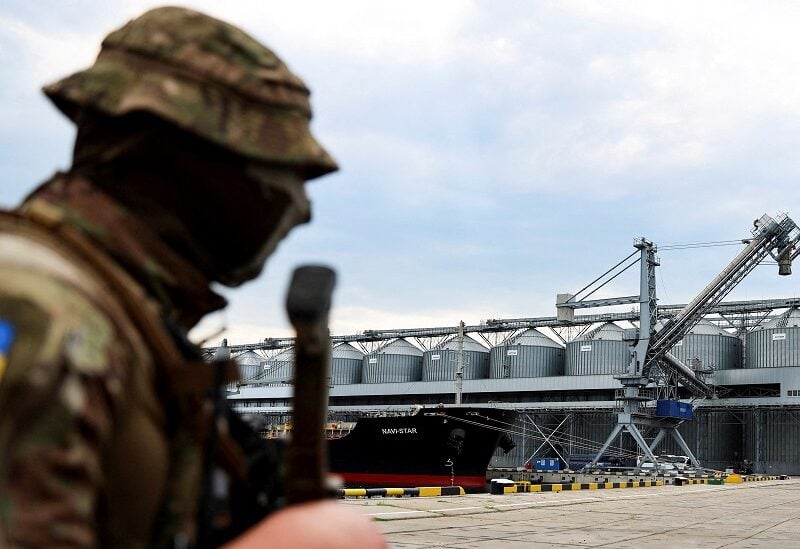 FILE PHOTO: A Ukrainian serviceman stands in front of silos of grain from Odesa Black Sea port, before the shipment of grain as the government of Ukraine awaits signal from UN and Turkey to start grain shipments, amid Russia's invasion of Ukraine, in Odesa, Ukraine July 29, 2022. REUTERS/Nacho Doce/File Photo

The Ukrainian embassy in Beirut said announced that the first shipment of Ukrainian grain since Russia’s invasion will no longer arrive in the northern Lebanese port city of Tripoli on Sunday as planned.

“Tomorrow’s arrival of (the) Razoni ship is postponed,” the embassy told AFP in a message on Saturday.

Updates regarding an arrival ceremony “will be sent later when we get information about (the) exact day and time of the arrival of the ship”, it added.

Asked why the arrival was postponed, an embassy spokesperson said: “I don’t have any other information at the moment.”

An official following the shipment said the vessel might not even dock in Lebanon if the cargo’s owner manages to sell it elsewhere.

“The ship will only go to Lebanon… if a trader buys the cargo,” the official told AFP, requesting anonymity.

The Sierra Leone-flagged Razoni set sail from the Ukrainian port of Odessa last Monday carrying 26,000 tons of corn, and stopped in Turkey the next day.

It was cleared for passage through the Bosphorus Strait by a team that included Russian and Ukrainian inspectors on Wednesday, and a Ukraine embassy spokesperson had later said it was expected to dock in Lebanon’s port of Tripoli at 10 am (0700 GMT) on Sunday.

The delivery is the first under a UN-backed deal, brokered with the help of Turkey last month, which aims to ease a global food crisis.

Lebanon, which is struggling with one of the world’s worst financial crises, is facing a particularly acute bread shortage.

Kyiv said another three ships loaded with grain set sail from Ukraine on Friday, heading for Turkey and markets in Ireland and Britain. A further 13 are waiting to depart.