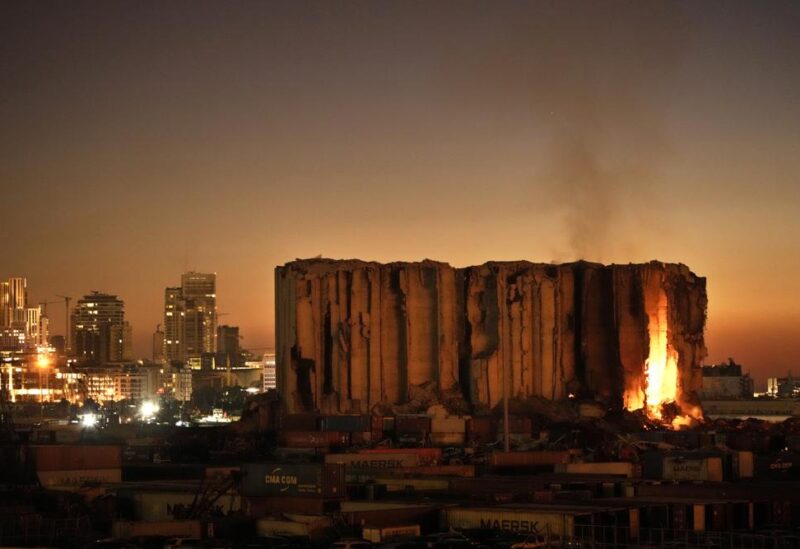 FILE - Silos in the north block of the Beirut Port, that were destroyed by a massive explosion in 2020, have caught fire due to fermented grains in Beirut, Lebanon, Sunday, July 24, 2022. It has been two years since a warehouse full of ammonium nitrate at Beirut's port exploded, destroying large parts of the city, killing more than 215 people and injuring thousands. Many families are losing hope of ever finding justice. (AP Photo/Hassan Ammar, File)

Paul Naggear’s 3-year-old daughter, Alexandra, killed in a massive explosion at Beirut’s port two years ago, and he has now given up on the idea that the outrage over the tragedy can bring about justice and prompt change in Lebanon.

Lebanon’s political elites have been obstructing the inquiry into one of the largest non-nuclear explosions in history for months. Many attribute the catastrophe to the Lebanese government’s protracted corruption and poor management, but the elite’s long-standing hold on power has made them invulnerable.

In fact, some of those charged in the probe were re-elected to parliament earlier this year.

Even as the wrecked silos at the port have been burning for weeks — a fire ignited by the fermenting grains still inside them — authorities seemed to have given up on trying to put out the blaze. A section of the silos collapsed Sunday in a huge cloud of dust.

“It has been two years and nothing’s happened,” Naggear, said of the Aug. 4, 2020 disaster, when hundreds of tons of highly explosive ammonium nitrate, a material used in fertilizers, detonated at the port. “It’s as if my daughter was just hit by a car.”

The blast caused a pressure wave that shattered everything in its path across the capital.

Naggear, his wife, Tracy Awad, and little Alexandra were in their apartment overlooking the port when the massive force sent glass, furniture and other debris flying. Naggear and his wife suffered cuts and bruises. Alexandra, or Lexou, as they called her, was severely injured and died in the hospital.

She was the second-youngest victim of the explosion, which killed more than 215 people and injured more than 6,000.

It later emerged that the ammonium nitrate had been shipped to Lebanon in 2013 and stored improperly at a port warehouse ever since. Senior political and security officials knew of its presence but did nothing.

Lebanon’s factional political leaders, who have divvied up power among themselves for decades, closed ranks to thwart any accountability.

Tarek Bitar, the judge leading the investigation, charged four former senior government officials with intentional killing and negligence that led to the deaths of dozens of people. He also charged several top security officials in the case.

But his work has been blocked for eight months pending a Court of Cassation ruling after three former Cabinet ministers filed legal challenges. The court can’t rule until a number of vacancies caused by judges retiring are filled. The appointments, signed by the justice minister, are still awaiting approval from the finance minister, an ally of Parliament Speaker Nabih Berri.

Judicial officials with knowledge of Bitar’s investigation told The Associated Press it was in advanced stages of answering key questions — including who owned the nitrates, how they entered the port and how the explosion happened. They spoke on condition of anonymity because they were not authorized to speak publicly about the investigation.

Bitar is the second judge to take the case. The first judge was forced out after complaints were raised against him by two Cabinet ministers, and if the same happens to Bitar it would likely be the final blow to the investigation.

The lack of justice compounds the pain of relatives and friends of blast victims. They feel let down and abandoned, not only by the government but by public apathy as the months and years have dragged on.

Initially after the explosion, there were large protests and sit-ins demanding justice. It raised hopes that Lebanon’s politicians might be held accountable.

Now only a handful of people show up at protests and sit-ins organized by relatives of the victims.

For Muhieddine Ladkani, whose father, Mohammed, was killed, time has stood still.

When they first heard explosions coming from the port, his father took the family into their apartment’s entrance hall, believing it would be safe since there were no windows. But the blast tore the front door off its hinges and sent a cupboard slamming into the elder Ladkani. He was in a coma for weeks with a brain hemorrhage. He died 31 days later.

“We still cannot remember, and we cannot gather as a family,” he said. “My brothers and uncles have my father’s photos as their profile photo. I don’t. Whenever I remember my father, I collapse.”

“It is something that I don’t want to believe. I can’t live with it,” Ladkani said. Those who voted for the politicians charged in the disaster are also responsible for his father’s death, he added.

“The ink on the fingers of the voters who voted for them is not ink but the blood of the victims,” Ladkani said.

One of the charged and reelected politicians, former public works minister Ghazi Zeiter, told the AP he had the right to run for parliament again because there is no court verdict against him. He said Bitar has no right to charge him because legislators and ministers have a special court where they are usually tried.

Amid the deadlock, some victims’ families are turning to courts outside Lebanon.

In mid-July, families filed a $250 million lawsuit against an American-Norwegian firm, TGS, suspected of involvement in bringing the explosive material to the port. TGS has denied any wrongdoing.

Naggear said his family, two others and the Bar Association have filed a lawsuit in Britain against the London-registered chemical trading company, Savaro Ltd., which investigative journalists in Lebanon say chartered the shipment, intending to take the nitrates from Georgia to an explosives firm in Mozambique.

Naggear said he is losing hope.

He and his wife, who is a dual Lebanese-Canadian citizen, had thought about leaving Lebanon after the blast. But the large public protests in the immediate aftermath gave them hope that change was possible.

But after this year’s parliamentary election results, they are again seriously considering leaving.

Still, they vow to continue working for justice. At a recent sit-in, they showed up with their 4-month-old baby, Axel.

“They are trying to make us forget … but we will not stop, for (Alexandra’s) sake until we reach the truth and justice,” Naggear said.

The Naggears have repaired their apartment, but they haven’t stayed there since Axel’s birth, fearing it was still not safe.

The fire burning in the ruins of the grain silos only feeds the sense of danger. A northern section of the structure collapsed on Sunday, and experts say more parts are at risk of falling. At night, orange flames can be seen licking at the base of the northern silo, glowing eerily in the darkness.