40 adults, 15 children on ventilators will die when fuel runs out Monday: AUBMC 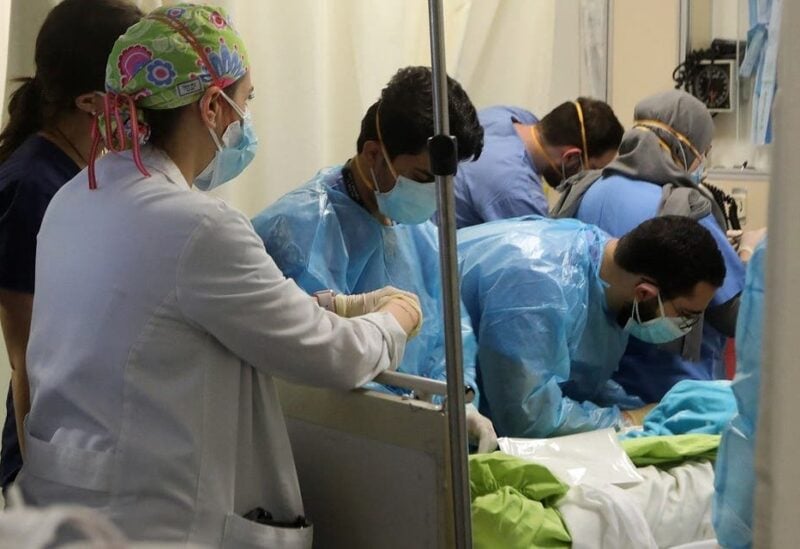 US-trained emergency doctor Nour al-Jalbout (L) is pictured during her shift in the emergency department of the AUBMC (American University of Beirut Medical Centre) in the Lebanese capital Beirut on March 17, 2021. (AFP)

At least 40 adults and 15 children on ventilators and other lifesaving medical devices will die on Monday once fuel runs out, the American University of Beirut Medical Center (AUBMC) warned on Saturday amid an ongoing fuel crisis in Lebanon.

“The American University of Beirut Medical Center (AUBMC) is facing imminent disaster due to the threat of a forced shutdown starting the morning of this coming Monday August 16, as a result of fuel shortages. This means that ventilators and other lifesaving medical devices will cease to operate. Forty adult patients and fifteen children living on respirators will die immediately. One hundred and eighty people suffering from renal failure will die poisoned after a few days without dialysis. Hundreds of cancer patients, adults and children, will die in subsequent weeks and very few months without proper treatment,” AUBMC warned in a statement released on Saturday.

AUBMC said it is making an urgent appeal to the Lebanese government, the United Nations and many of its agencies operating in Lebanon to help supply the hospital with enough fuel before it is forced to shut down in the next two day.

The American University of Beirut (AUB) has been rationing electricity and fuel across campus for weeks but is running out of both and will not be able to continue to supply its medical center, the hospital added.

Both the AUB and AUBMC administration said they blame and hold the Lebanese government and officials fully responsible for the ongoing humanitarian crisis in the country.

“When lives are lost because of a fully preventable lack of electricity and fuel, with family members watching and knowing that the fuel is already present in adequate supply within the country, it will be a moment of infamy, a moment unlike any that Lebanon has experienced since World War I and the famine which cost a third of the population of Mount Lebanon their lives. The AUBMC administration insists that all those in positions of responsibility immediately put aside all their disputes and work together to prevent this imminent disaster. A disaster no one deserves. Least of all the Lebanese and other inhabitants of this nation, whose unwarranted suffering does not deserve to be crowned with needless, pointless, irreversible tragedy,” AUBMC said.