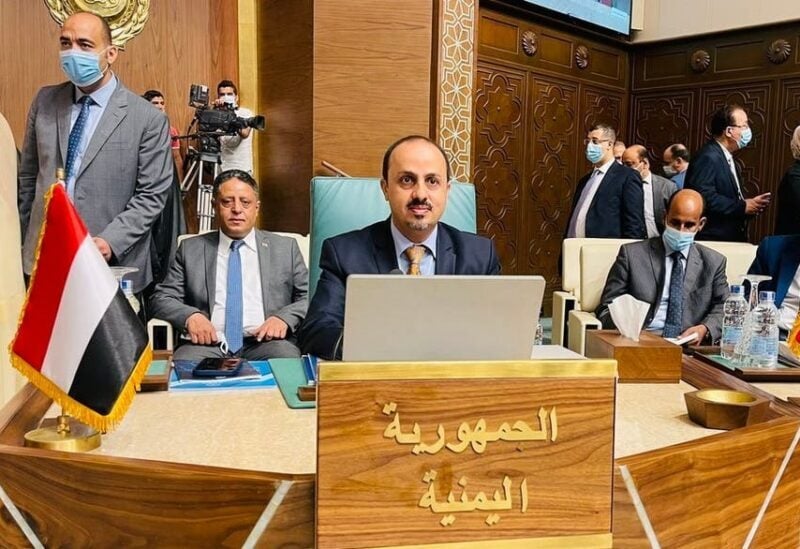 The Yemeni Minister of Information, Muammar Al-Eryani, considered that the evidences presented by the Coalition to Support Legitimacy today, confirm Hezbollah’s involvement with the Iranian Revolutionary Guards in the aggression against Yemen.
Al-Eryani confirmed in a series of tweets on his Twitter account:
“The evidences presented by the spokesman for the Coalition to Support Legitimacy, Brigadier Turki al-Maliki, confirms in a press conference, that what is happening in Yemen is an Iranian aggression, and that Tehran and the Lebanese Hezbollah militia, are the ones with the political and military decision, and that the Houthi militia, is nothing but a dirty tool for the aggression that does not target Yemen alone, but rather the entire region.”
Adding that: The scenes presented by the coalition are additional evidence that the Iranian Revolutionary Guards and the Lebanese Hezbollah militia, are the ones who run the military operations in Yemen “command, planning, fighting, training, arming, manufacturing,” and it is they, who launch ballistic missiles and bomb drones to kill Yemenis, and target Civilian objects in the Kingdom.
Al-Eryani also questioned “about the stances of the presidency, the government, political forces, elites and the brotherly Lebanese people regarding the aggression led by the Hezbollah militia against Yemen, and the devastation and destruction it has caused and inflicted upon the people and stones, and hundreds of thousands of innocent civilian victims, and about their stance on its terrorist activities that destabilize the security and stability of the region.” .
And he warned, “The continuation of aggression and terrorist activities led by the so-called Hassan Nasrallah and his militias on Yemen and the region, destabilizes the image of Lebanon, the country of peace, love, beauty and coexistence, and harms its relations with its brothers and friends, and leads it to be a state isolated from its Arab surroundings and depth.”
He concluded his speech by renewing his call upon the brothers in Lebanon, to declare a clear stance regarding the aggression of the Hezbollah militia, and exert real pressure to withdraw its experts and fighters, stop the smuggling of weapons to Yemen, and prevent the use of the lands and capabilities of the Lebanese state to support the Houthi militia, in a manner consistent with the government stances, and international resolutions related to the Yemeni crisis.”