Al-Rahi visits Chapel and Garden of Saint Charbel in Bucharest: We pray that the Lord protects our homeland amidst all its crises 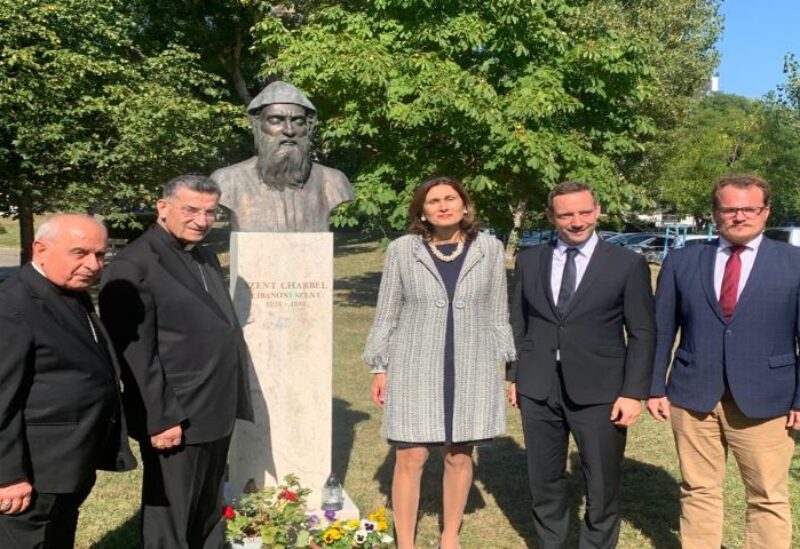 On the sidelines of the Conference, the Patriarch visited yesterday afternoon Saint Charbel’s Garden in Bucharest, accompanied by the Secretary of Government for Aid and the “Hungary Helps” Program, Tristan Azbej, and Lebanon’s Ambassador to Hungary, Joanna Azzi.

Al-Rahi also visited the Chapel of St. Charbel in the parish of “Our Lady of the Angels”, where he gave a brief word in which he said: “The mystery of Saint Charbel is in the essence of the Blessed Sacrament, the Sacrament of the Eucharist.”

“Here we are today, seeking the intercession of Charbel, the Saint of Lebanon, in his mother country as well as in the world, in the East and the West, and these are the effects of the great mystery of the Eucharist, which we honor today at the World Eucharistic Conference in Budapest, in which there is an invitation to every believer to renew his honor for the mystery of the Eucharist, earthly food and heavenly provision,” the Patriarch added.

“As we are here with you in Hungary, we pray that our nations will be an example, as you are today, to testify to our orthodox Catholic faith. We all know all the difficulties and faith obstacles that your country and the world are going through. Therefore, Saint Charbel entrusts our intentions to strengthen our power and faith, so we yearn for the Lord alone and always aim to arm ourselves with His sacred body and blood,” al-Rahi said.

“Yesterday we saw during Mass thousands of believers praying with us in the presence of Christ in the Eucharist, and with you we pray for Hungary and the world, and we also pray for the intention of peace in our beloved country Lebanon, the homeland of Charbel and the saints,” he went on, adding, “According to what Pope St. John Paul II said, it is more than a homeland, it is a message to the East and the West, and we pray that the Lord preserves our homeland in its message identity, and preserves its coexistence and democracy amidst all the crises Lebanon is experiencing today, and we are all confident that the Lord hears.”

Later in the evening, and also on the sidelines of the opening of an exhibition embodying the tragedy experienced by Iraq, al-Rahi met with the Hungary’s Deputy Prime Minister Zsolt Semjen, with whom he discussed ways of joint cooperation to ease the burdens of the economic and social crisis that is afflicting Lebanon.

Semjen affirmed that Hungary will continue to stand by Lebanon, hoping for international efforts to save it.