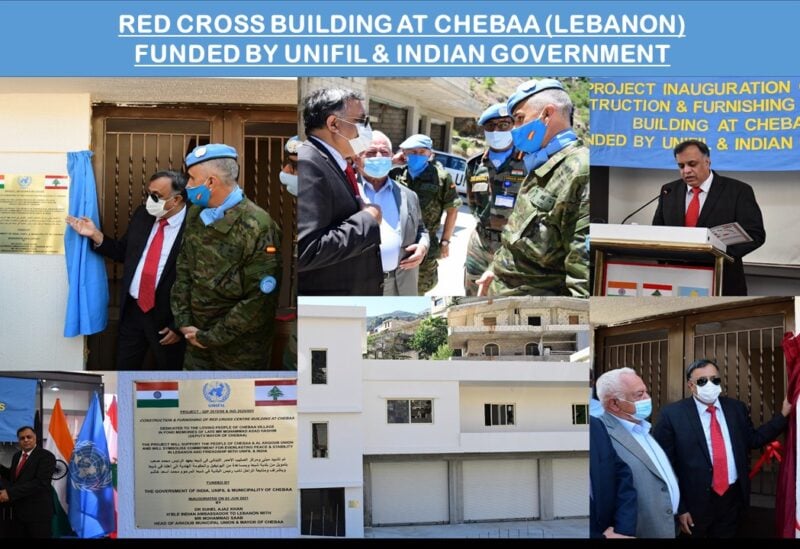 Ambassador of India to Lebanon, Dr. Suhel Ajaz Khan, accompanied by Head of Chancery, Mr. Jagjit Singh, visited South Lebanon on June 5 and inaugurated the newly constructed Red Cross Building at Chebaa municipality and dedicated the building to the people of Chebaa.

The building is part of the Government of India’s support to the local communities in South Lebanon.

Ambassador Dr. Khan, in his speech, reiterated the commitment of the Indian battalion, as part of UNIFIL, to contribute to the establishment of peace, stability, and safety in South Lebanon — as per the UN mandate.

The Ambassador also emphasized the existing bonds of trust and mutual respect between the Indian battalion and the local communities. He noted that the project was a landmark with great social impact and would serve nearby villages and municipalities, in addition to Chebaa, where the building is located.

Khan also expressed belief that the project would enhance the existing capability of Red Cross in the region manyfold.

The Mayor of Chebaa, the East Sector Commander, and other local dignitaries profusely thanked the Government of India in their speeches for this humanitarian project.

The Indian battalion, which has been serving as part of UNIFIL for the past 21 years, has always supported the local communities by its various humanitarian initiatives. This project will enhance the bonds of love and friendship between India and Lebanon.

On this occasion, Ambassador Dr. Khan also paid homage to late Mr. Mohammad Asaad Hashim, former Deputy Mayor of Chebaa, who was closely associated with the project, but unfortunately had passed away due to a road traffic accident.