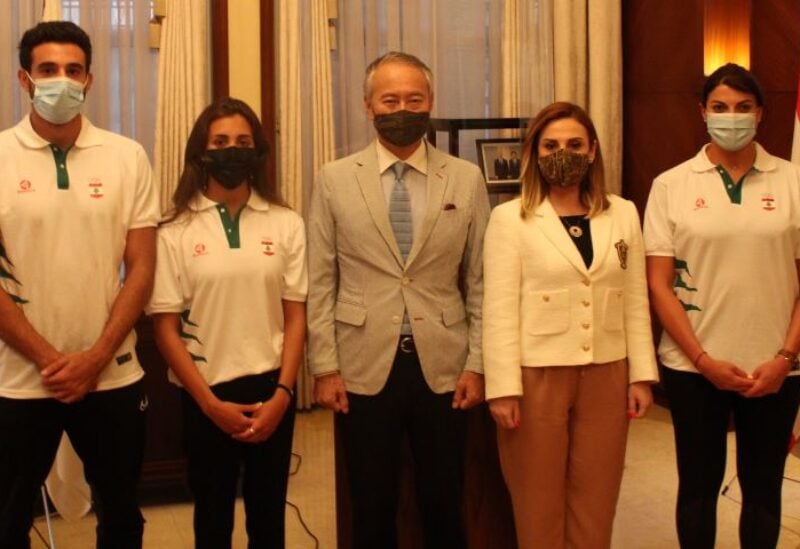 Ambassador of Japan to Lebanon OKUBO Takeshi, received On Tuesday, July 13, at his residence three of the six Lebanese athletes qualified for the Tokyo Olympics – Ray Bassil (Shooting), Noureddine Hadid (Athletics Track and Field) and Gabriella Doueihy (Swimming) – to demonstrate his wish of their excellence in the upcoming international competition. The team of athletes were accompanied by Vartene Ohanian, Minister of Youth and Sports; Pierre Jalkh, President of the National Olympic Committee (NOC); Hassan Rustom, Secretary General of the National Olympic Committee; and Mazen Ramadan, Head of Delegation to Tokyo.

President Pierre Jalkh commemorated the gathering, stating their goal was not just to win a medal, but also to show the best image of Lebanon and to leverage the Tokyo Olympics—where genderequal representation is achieved—in promoting the equality. Minister of Youth and Sports Vartene Ohanian expressed her appreciation for how the athletes had been advocating good imagery of Lebanon, believing their participation would bring in a sense of joy to the country.

Ambassador Okubo commended the athletes for their tireless commitment during the extraordinary circumstances due to a series of crisis and expressed that their participation would stand as a beacon of hope to Lebanon. The ambassador also wished this event would stand as an opportunity for the humanity to unite and rebuild self-confidence in solidarity. At the end, he affirmed once again that Japan stands in solidarity with Lebanon and extended his wishes of luck for the Lebanese athletes, referring to them as “true Ambassadors of Lebanon.”