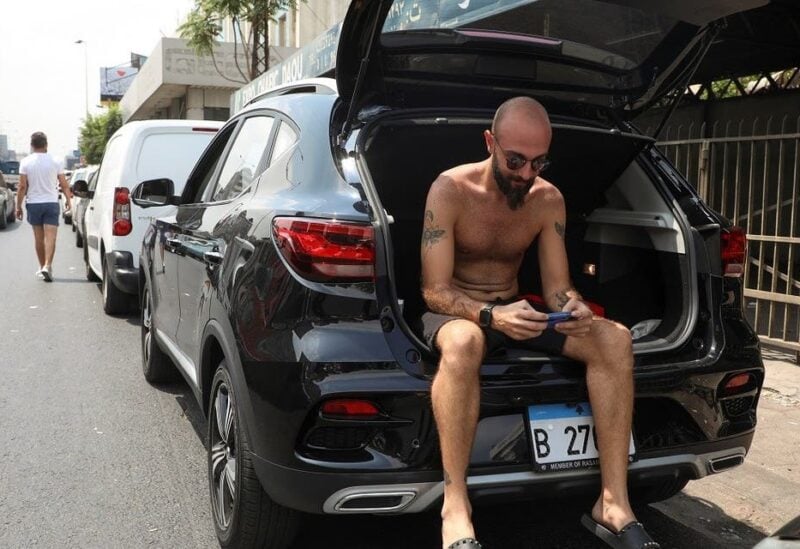 Without electricity for air conditioning or fuel to reach the beach, two comedians are keeping cool in crisis-hit Lebanon by splashing around in an inflatable pool – in their living room.

“When the generator comes on, we’ll crank up the light to get a tan,” one of the women quips, part of a new wave of Lebanese opting to laugh in the face of disaster.

As the economic downturn deepens, Lebanese are increasingly turning to caustic comedy to mine humor from the everyday chaos, be it the rampant power cuts, hours-long lines at gas stations or the 90 percent currency devaluation.

“We’re showing how far we’ve fallen,” said Nathalie Masri, an advertising executive who launched the “Coffee Break” page with friend and associate Nadyn Chalhoub in 2018 with the tagline “Sarcasm is our means of survival”.

Their first posts were mostly social commentary, but when Lebanon’s financial collapse began a year later, the pair turned to the widespread daily shortages that shape daily life.

“Why do you need cooking gas? Just rub two rocks together and you’ll make a fire,” said Chalhoub in a May 2020 video.

Their “Lebanese 2021 Starter Pack” came with a logbook to track planned electricity outages in rationing and a generous handful of “anti-anxiety pills from abroad” – as most Lebanese pharmacies can no longer afford to stock them.

Nor are they alone in finding humor in the new reality, with Lebanese social media awash with gallows humor.

The anonymous author of @Lebaneselira – whose Twitter bio declares “I’m collapsing” – posts quips about the lira’s volatile exchange rate on the black market.

WhatsApp chats, too, are filled with sardonic asides: jokes about the new “fashion trend” for half-ironed shirts amid all the power cuts or mock pride at Lebanon achieving zero carbon emissions as empty tanks keep cars home.

In a mock tutorial on Instagram, Farid Hobeiche shows his 156,000 followers how to turn fridges into extra clothes closets since blackouts had rendered them useless for food.

“It’s not about inspiration; it’s reality,” Hobeiche told the Thomson Reuters Foundation from his hometown of Ghazir, north of Beirut.

More than a jokey escape, he said the posts offer people a collective coping mechanism in a crisis the World Bank classifies as one of the worst in 200 years.

“I’m not doing comedy to make people laugh so hard that they pass out… But to make them feel hope – when they see someone still standing, still joking,” he said.

Countless studies show how humor helps the brain cope with hardship – even for Holocaust survivors or prisoners of war.

A 2014 study published in the Journal of Consumer Research found that “humorous complaining” could help people by reframing dire situations in a less negative way.

“When we share the pain and the reality, we cry together, but we can also laugh together at the absurdity of it,” said Shaden Esperanza, a stand-up comedian.

She has even joked about the exorbitant cost of imported feminine hygiene products, a subject that can still be seen as taboo in Lebanon.

“Viagra is subsidized by the government, but not tampons? I’ll gush blood all over you,” Esperanza repeated to the Thomson Reuters Foundation.

But with Lebanon’s economy in freefall, even its most playful observers feel it resembles a race to the bottom.

“What I used to be able to make fun of two weeks ago, I can no longer laugh at today – because the crisis is getting so much worse,” said Hobeiche.

Posting online may soon not even be an option, as shortages of fuel at telecoms centers have forced Lebanon’s state internet provider to cut connectivity in swathes of the country.

“I guess I’ll have to send my CV around,” he ribbed.

The “Coffee Break” hosts spoke to the Thomson Reuters Foundation from an office with no electricity, through a cellphone with a precariously dwindling battery.

The pair said they were considering working abroad as power and internet cuts had derailed work deadlines, while other shortages had prompted health worries for their young children.

“We want to be able to write, ‘I hope this email finds you well,’” joked Chalhoub.

“And have the email actually send,” Masri filled in.