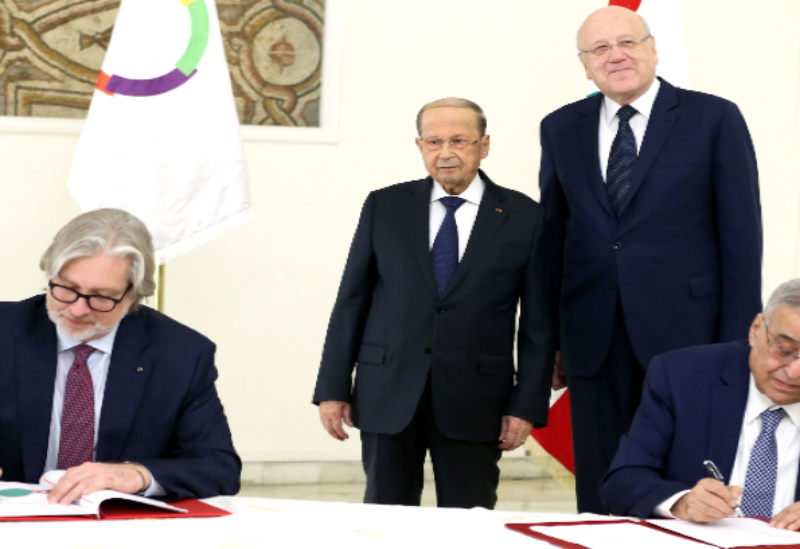 The Presidential Palace witnessed today, in the presence of President of the Republic, General Michel Aoun, the signature of an agreement to open the Regional Office of the International Francophone Organization for the Middle East in Beirut. Prime Minister, Najib Mikati, also attended the meeting.

The agreement was signed by Foreign Affairs Minister, Abdullah Bou Habib, from the Lebanese side, and from the Organization’s side, its Director and delegate of Secretary General, Mr. GeoffroiMontpetit. President Aoun asserted that Lebanon will continue its work and cultural advancement through French language and its values, and will work to spread this language in the region.

Also attending were: Institutional Communication Coordinator, Ms. FATOU KIETA MATOKO, and the Deputy Director of the Office of the Francophone University Agency for the Middle East, Ms. Cynthia Raad.

At the beginning of the celebration, Professor Hardan spoke about the various stages of establishing this representation, pointing out that the matter was only possible based on a proposal made by President Aoun, during the summit of the International Organization of la Francophonie, which was held at the level of Heads of state and Prime Ministers in Yerevan. Hardan noted the importance of this event because it comes as a recognition by the organization of the historical role that Lebanon plays in the heart of the organization, in addition to that it is a recognition by Lebanon of the French language, as an essential component of its cultural identity based on pluralism and respect for differences.

Professor Hardan also thanked the Secretary-General of the Francophone Organization, Mrs. Louise Mushikiwabo, “A great friend of Lebanon”, for her insistence that this agreement be signed before the Francophone Ministerial Conference next Friday.

For his part, the Executive Director, Mr. Mont Petit, conveyed to President Aoun the greetings of the Secretary-General of La Francophonie and her thanks for his personal commitment to the realization of this agreement and the establishment of the representation in Beirut.

Montpetit said “It is normal that we are here today, and we have already been in Lebanon, for several years, in one way or another in the service of the major Lebanese universities. Today, by establishing this representation, we will consolidate our presence more and embody it more in the service of Lebanon and the Lebanese”.

Montpetit also indicated that “We are eager to open the headquarters of this representation in Beirut and to start work there. Lebanon is an active and historical partner of the Francophonie, and we will work to launch a renewed dynamism to work with Lebanon in several fields, especially with the youth. We have also started a series of joint work programs”.

“The Francophone is your organization, and this in itself is a challenge for all of us to work together according to the principle of Francophone solidarity” Montpetit concluded.

The President responded with a speech in which he welcomed the attendees, especially the Executive Director and the accompanying delegation, requesting to convey his best regards and gratitude to the General Secretary of La Francophonie.

President Aoun also thanked all those who worked to achieve this step represented in the establishment of a Francophone representation in Lebanon.

“This step is very important for the Francophonie, and will allow us to continue adhering to the French culture and language and what they represent, especially since the Lebanese have adhered to them since ancient times, and we were among the first to speak French in the Middle East” President Aoun said.

“Today, we are in dire need of the values ​​that the French language represents. We have always chosen French as a classic language embraced by Lebanese schools. With such a representation, we will continue our work and our cultural advance through this language, and we will work to spread it in the region” the President continued.

“We congratulate ourselves on the signing of this agreement between Lebanon and the Francophone Organization” the President concluded, reiterating Lebanon’s thanks to all those who contributed to the achievement of this event.

After the signing ceremony, Professor Hardan and Mr. Montpetit held a joint press conference, in which Hardan began with the following speech: “Let me, Mr. Executive Director-General, thank you, and through you, Mrs. Secretary-General, and all the directors and teams of the International Organization of la Francophonie who have worked with us to put into practice this agreement that we have just signed.

The signing of the agreement aimed at establishing a representation of the International Organization of Francophone in Beirut, to cover the Middle East is a major event for Lebanon. This has been awaited since the convening of the Francophone Summit in Yerevan, at the level of heads of state, in October of 2018. As a reminder, for years and even a few months before the summit, it was almost certain that there would be one representative office for the Arab world, with its headquarters in Tunisia.

However, on the initiative of His Excellency the President of the Republic, Lebanon submitted a proposal to the summit, in consultation with Tunisia and the rest of the member states,requesting the establishment of two representations: one in Tunisia in the year 2020, and a second in Beirut in the year 2021, for reasons of specialization and integration, and the Lebanese proposal was adopted.

The day after the summit, a workshop was opened, which led today to the signing of the agreement, which is the fruit of a long process that reached its conclusion, according to the signature approved by the summit, despite the successive crises that shook our country, and thanks to the commitment of those responsible for this file.

Thanks to the commitment and enthusiasm of those responsible for this file with the International Organization of la Francophonie, in addition to the active participation of the concerned Lebanese administrative bodies, foremost of which is the Presidency of the Republic in addition to the Presidencies of the Council of Ministers and Parliament, the Ministry of Foreign Affairs and Emigrants, and all other ministries, in cooperation with our delegation to the International Organization of Francophonie. Of course, this representation will have a local national character that falls within the framework of preserving the use of the French language and the values ​​it bears, in particular: respect for human rights, democracy and cultural diversity. It will, in a distinctive way, have a regional message that falls within the framework of preserving and consolidating the French language and working on its development, especially in countries that turn more and more to the French language.

It is true that the agreement related to the headquarters of the representation has suffered a difficult path. We have abandoned the idea of ​​establishing the headquarters in the location proposed by the General Directorate of the Ministry of National Education, for urgent and primary reasons. Those responsible for this file searched for a long time for another headquarters, before the BDL would put at their disposal a very wonderful place on Bank Street. The procedures took longer than expected, but today we announce that the text of the headquarters agreement has become almost final, and it will be signed next January.

The establishment of this regional representation in Beirut bears a double character: the renewal of the recognition of the international organization of la Francophonie of the pivotal historical role that Lebanon plays at the regional and international Francophone level on the one hand, in addition to the renewal of recognition of Lebanon in terms of the contribution of the French language to the crystallization of its identity based on pluralism and respect for differences”.

Montpetit said: “As you have mentioned, the International Organization of Francophonie has just signed with Lebanon, under the chairmanship of His Excellency the Lebanese President, an agreement to establish a permanent representation for it in Beirut for the Middle East.

This is a promise that has been fulfilled, and the heads of state and governments of the Organization have committed to it since 2018, in Yerevan, during the Francophone Summit.

Today we fulfill this promise, and I will return here to inaugurate the headquarters of this representation. The organization will work to unify the efforts of all the living forces of la Francophonie working on the ground, and I mention, for example, the work of the Francophone University Agency in Lebanon, which is working hard with major Lebanese universities.

We have defined the various frameworks of the International Organization of Francophonie, in Lebanon, on the French language, in terms of education, in addition to working on women’s independence. Based on the organization’s presence in Beirut, it is certain that we will be more active and more present on the ground for the benefit of the Lebanese is a natural partner for the organization, and it is natural for us to be here and to open a representative for the organization in Beirut.

Since 1973, Lebanon has been part of the Francophone family, and you have hosted a Francophone Summit and a Francophone Games, and your writers and artists shine in different continents, to be here in Lebanon, the land of convergence, and for the International Organization of Francophonie to open a center for it to continue the dialogue of cultures, this dialogue on the common values ​​that unite us around our language, which are the values ​​of peace and democracy.

Here, I must stress the importance of the role of Education and the quality of French language education in Lebanon, and do not forget that we have about two and a half million Lebanese Francophone members in Lebanon, and there is a network of Francophone schools and universities, and it is our duty to be loyal to this appointment with you, in order to support the Lebanese government, Lebanese women and the Lebanese men to make sure that Francophone remains a pillar that is essential here, and we will work vigorously with all the living forces in Lebanon”.