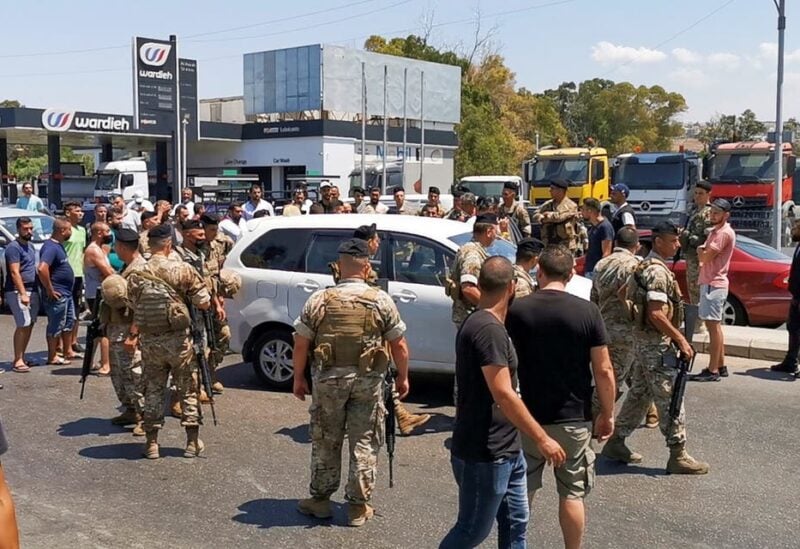 Lebanese army soldiers try to open a road blocked by cars near a gas station in Sidon, Lebanon August 12, 2021. (Reuters)

Angry residents blocked roads across Lebanon Thursday, a day after the central bank said it could no longer afford to prop up fuel imports except at the black market rate.

As Lebanon’s economy crumbles and its foreign reserves dwindle, the decision has been considered a de facto lifting of fuel subsidies.

The national news agency said people blocked roads in the north, south and east of the country.

AFP correspondents saw motorists in long queues outside petrol stations still open, after they rushed to fill up before the energy ministry officially announced the new prices.

The cost of petrol is expected to at least triple, according to projections by the Information International think tank.

In front of one petrol station in Beirut, Hussein Majed asked how everyone was expected to cope.

“You’re going to force us to steal just to fill up a moped,” he raged.

“When the judge asks, we’ll say it was to buy petrol, eat and drink.”

The Lebanese pound has lost more than 90 percent of its value against the dollar on the black market in less than two years.

Officially, however, the currency has remained pegged at 1,507 to the greenback.

Until recently, hydrocarbon importers were given access to dollars at the advantageous official rate.

But authorities last month increased it to 3,900, sparking a sharp rise in prices at the petrol pump.

On Wednesday, the central bank said it would further increase to the “market rate,” which is currently hovering at around 20,000.

The bank said it had spent $800 million on fuel imports in July.

The outgoing premier, Hassan Diab, has protested against the bank’s unilateral decision.

Foreign reserves have plummeted by more than half since the economic crisis started in the autumn of 2019, from $32 billion to around $15 billion today, according to central bank figures.