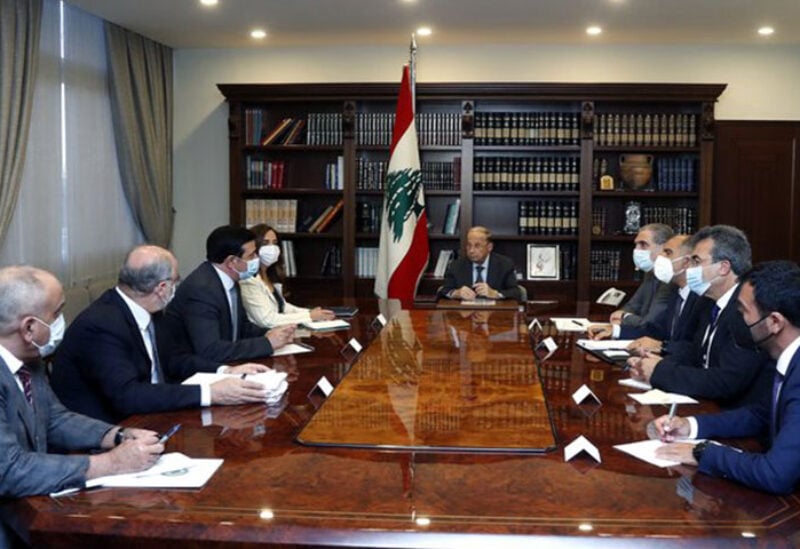 The President of the Republic, General Michel Aoun, chaired a meeting today at Baabda Palace devoted to tackle Beirut Port conditions after the August 4th explosion.

Minister Najjar, said in a statement following that the President “asserted the need to begin, as soon as possible, the process of removing rubble and hazardous materials resulting from the Beirut Port explosion, which would pose threats on public safety”.

Deliberations were held to remove landfills resulting from the explosion, where the President stressed the need to “Take necessary steps to stop the prolonged danger due to landfills and stored materials, in accordance with the laws an regulation in force”. President Aoun also gave his directives to lay down legal, economic, financial and technical studies, and the general plan, for developing the Port.

“The process of rebuilding the Beirut Port requires drawing up a master plan and studying the equipment and construction, as well as new laws which govern the process of managing the Port in the future. All of this requires the formation of a new and effective Government,” Najjar added.

Najjar added that the meeting addressed some issues related the dangerous flammable materials that present there, and in some Lebanese regions. “I have submitted a request from the President, to obtain an exceptional approval to allocate part of the World Bank loan to fund the removal of dangerous containers, present in the Beirut Port. Media outlets have reported around 52 containers of dangerous materials, whose packaging ended more than a month ago.

We are still exchanging accusations here and there, since funding for this operation has not yet been secured. Therefore, containers are still in the Port. We have also requested that part of the World Bank loan be reallocated so that we can fund the removal of these containers from the Port and from oil installation. I have also requested that part of the amount allocated to the Public Works’ Ministry, be allocated to remove rubble, which may pose a danger, especially in summer season since it contains different mixed materials. There is a French company which is conducting a study to remove this rubble, and the President stressed that this issue is very basic and materials which might cause danger as result of any ignition or accident, must be eliminated.

In addition, the President has given his initial approval to allocate an amount from the World Bank loan to fund this operation, and part of this loan will be re-allocated to launch a new process for preparing a book of conditions for rebuilding the port according to modern principles. We need a new master plan today, for rebuilding the Port. This scheme is a large and complex procedure, which includes a legal, economic, financial and engineering part, which requires funding and time. In the beginning, we have to launch a process of preparing a book of conditions in cooperation with the World Bank, and we have obtained the directives of the President to initiate this matter.

“As you know there are many parties interested in participating in the rebuilding process, including states and companies which offered their services for this, as well as international ports. Therefore, before any company, state or even the World Bank, begins to assist in this process, we must decide which Port do we want, and draw up a new plan for building this Port in terms of equipment or construction, in addition to developing a study of new laws which will take care of the Port-management in the future,” he said.

Najjar said that the President, has requested this meeting to discuss the administrative and urban workshop and the directive plans related to the Port in order for the workshop to start, hoping that we will be ready in time to put this issue on tenders, and put in place the necessary laws to manage the Port again and define institutional identities, and that a new government be formed since this process requires laws and legislations”.