President of the Republic, General Michel Aoun, stressed that “Media campaigns, which increased in frequency during the past two days, which tried to link the role of the Presidency of the Republic and the judicial measures taken against a number of banks, are a peak in fraud, slander and misinformation”.

“It is a confirmed result of the state of chaos that Lebanon is experiencing on various levels in addition to persistence in hitting state institutions and the laws in force” the President said.

Judges took the oath in preparation for the commencement of their duties in the commission.

The President affirmed that what was published in some newspapers today and in audio-visual media and on social media sites about “confrontations” between the Presidency of the Republic and banking officials is pure imagination and aims to politicize this pure judicial file and invent fake battles and falsely link them to the upcoming parliamentary elections on May 15th.

“The Presidency of the Republic has never interfered in the work of the judiciary and respects its independence and has nothing to do with the measures that are taken, but in return it is following up the forensic audit file in the accounts of the Banque du Liban in implementation of the law issued in this regard in the context of combating corruption and revealing the causes of the financial deterioration that afflicted the state” the President asserted.

Moreover, President Aoun pointed out that all this loss can be avoided by approving the financial recovery plan in agreement with the International Monetary Fund, including the adoption of the Capital Control Law, which the government must expedite its implementation.

On the other hand, the President called on the head and members of the electoral supervisory body to fully exercise their role, considering that the responsibility entrusted to them is great to ensure the integrity and transparency of the parliamentary elections, prevent quarrels and uphold the law.

Judge Hamdan and the journalist Khoury took the following oath:

“I swear by God Almighty to carry out my work in the Supervisory Board for the elections with honesty, impartiality, sincerity and independence, while being keen to adhere absolutely to the laws and regulations, especially those that sponsor the elections, in order to ensure their freedom, integrity and transparency”.

After that, President Aoun, Minister Mawlawi, Judge Abdul-Malik and the two new members of the commission met, where they discussed the commission’s work, its needs, and the administrative, financial and logistical measures that were taken to enable it to perform its work in implementation of the law of its establishment.

President Aoun met Energy Minister, Walid Fayyad, and discussed with him the developments related to the situation of electricity and the plan approved by the Cabinet.

After the meeting, Minister Fayyad made the following statement:

“I congratulated President Aoun on the the Cabinet’s approval of the plan for the sustainable development of the electricity sector, and this matter is very important because it serves Lebanon’s interest and is a prerequisite for moving forward with financing operations in the short term from the World Bank to obtain Egyptian gas and electricity from Jordan.

The ball is now in the court of the World Bank to start formal negotiations on financing with the Lebanese state, and we can also say that reliance is also on the United States and the American administration to give Egypt the final green light on the issue of contracting for gas.

During the meeting, other basic matters were also discussed, such as the issue of the gas that Lebanon wants to deliver to Al-Zahrani through the possibility of (Liquid natural gas) and obtaining financial support for this, especially for the operation of power stations, which has become a very difficult situation for operational matters, especially the Zahrani and Deir Ammar stations.

As for the timetable for the new laboratories, I explained to President Aoun that the Council of Ministers is working to complete this file quickly, and my personal concern is not technical matters, but rather the financing mechanisms for these laboratories.

I pointed out that the plan includes a timetable for the stations, the first phase in 2024, the second in 2025 and the third in 2026, knowing that we can through the Council of Ministers collectively search for a way to speed up its completion”.

Asked about the confusion about the reality of the Selaata factory, the Energy Minister replied: “There is no confusion about this issue. When we build the stations, we follow a guiding plan to produce the lowest cost, and this plan includes stations in several places, which are four, two of which are in Deir Ammar and another in Zahrani and a station in Salata. The reason for the presence of four stations is to stabilize the network and create a balance between production and distribution. There is a need to dismantle the Zouk station, which supplies Lebanon with electricity at a high price and is very harmful to the people of Kesrouan and the densely populated area.

The location in the master plan gives us the possibility to implement this plan”.

The President met the South Korean Ambassador to Lebanon, Mr. Il Park, and discussed with him the bilateral relations between the two countries and ways to develop these relations.

Ambassador Park affirmed Korean support for Lebanon and the desire to help, especially in the difficult circumstances it is going through. 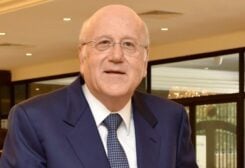